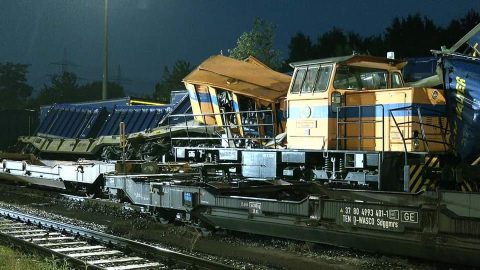 On Friday evening, a 600-meter-long freight train hit a convoy of stationary wagons at the Container Terminal in Herne, in Western Germany, 20 km from Essen. Nobody got injured, but the wagons got damaged. The terminal is expected to stay closed until at least Tuesday in order to allow the removal of the two convoys.

The train, coming from the Czech Republic and travelling at a speed of around 15 km/h, hit the stationary convoy, causing the destruction or damaging of several loaded freight cars. The only person involved in the accident was the train conductor, who managed to jump out of the locomotive before the impact. The locomotive was destroyed together with 15 to 20 containers.

Thorsten Kinhöfer, Managing Director of CTH Container Terminal Herne GmbH, stated: “The train did not come to a stop because the brakes most likely failed. Everything indicates that it was a technical error and not a human error. We are very happy that the engine driver was not injured.”

“Technical error” laconic, “business as usual” and, by media…, excused – simply an “accident”…, like costly, fatal, etc., derailings, which are “caused” by broken rails, etc., etc…. This is not sustainable! Industry needs quality programs, worthy 2022!
Why did “accident” happen and how will it, duly be attended? Railway, the safest on shore transport device, now deserves better!