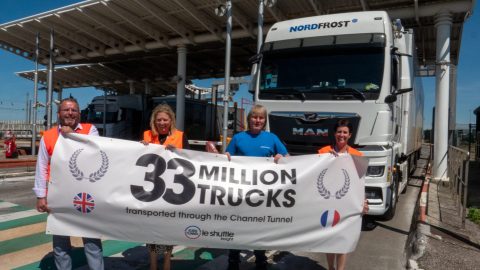 Usually, when speaking about freight trains, one pictures them carrying cargo. However, there are freight trains known as rolling highways that transport trucks. One such service is the Eurotunnel Le Shuttle Freight, which transports lorries between the UK and France. After 28 years of operations, the service reached an impressive milestone by transporting 33 million trucks on rails.

“Since 1994, more than 700 million tonnes of goods have been transported via the tunnel aboard one of the 15 Truck Shuttles – 800m long, carrying up to 32 trucks and travelling at a speed of 140km/h for a 35-minute journey,” said the company that has been operating the service since 1994. It also added that during this period it transports approximately 25 per cent of the goods entering the UK. “It is incredible that we have already hit a 33 million milestone, and we look forward to celebrating our next,” commented Christian Dufermont, freight commercial director at Eurotunnel.

Le Shuttle freight celebrated its 33 millionth truck last Monday, 12 July. Incidentally, the truck that helped the company reach its milestone belonged to company Nordfrost, a German frozen and chilled food transporter to the UK and “one of the service’s historical customers, using it since it opened.”

However, the truck’s driver was also a symbolic figure since he has been driving with the tunnel shuttle for 13 years and has used the service more than 2,500 times- an impressive number. “I’m thrilled to have been number 33 million,” he commented.

Still, however, balance, some 75%, is by sea and providing for redundancy, the vital, at any sustainable, high quality, “JIT”, supply chain.
(Diversity, strategy of Nature, is requested.)
Still, for Hemisphere, logistic costs are high, too high. Severe bottleneck of railway, vulnerability, remains and now decisively has to be outed.
Simply, maintenance work has turned too costly. (Regardless of Big Data and “predictive”, broken rails…by far, is the most common reason of derailments…, etc.)