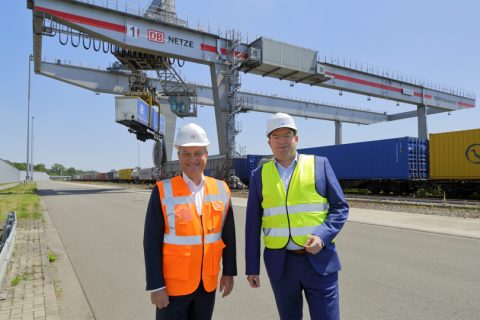 Duisport and the Deutsche Umschlaggesellschaft Schiene-Straße (DUSS) kicked off a partnership to bring more trucks on rail. Duisport will be responsible for the reception of lorries at the future Duisburg Gateway Terminal (DGT) location. From there, it will transport trailers with terminal vehicles to the DUSS terminal, where they will be transhipped on rail.

“In good partnership, we agreed to more freight traffic on climate-friendly rail. This solution will enable us to handle goods delivered by truck even before the end of construction work on our own access road,” said Alexander Stern, managing director of DUSS. Duisport CEO Markus Bangen commented that the partnership is the starting point of a stronger cooperation that will intensify even more with the construction of new terminals and road infrastructure within the port.

The Duisport-DUSS partnership signals a broader attempt to decongest city streets around the inland port from trucks. This means that instead of trucks driving through populated areas and neighbourhoods to reach the DUSS terminal, they will access the port through a single gateway and gather in a single location. Duisport will transport them from this location to the DUSS facilities, where they can continue their trip using rail.

Duisport wants to implement this approach in the long run too. “The aim is to efficiently link the total of four future intermodal terminals in Ruhrort and Meiderich via roads within the port. Combined with intelligent traffic routing, this will relieve residents’ streets and noticeably reduce emissions and waiting times,” said the port.