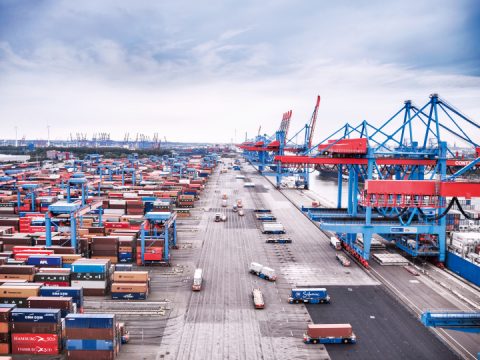 Strikes, storms and construction: rail struggles to find its way to German ports

Rail terminals in the ports of Hamburg and Bremerhaven are reaching full capacity leading to unforeseen train delays of up to 48 hours and cancellations. The situation results from a combination of port strikes, storm-related infrastructure problems, and planned construction work. “Many of our rail assets are blocked,” says METRANS.

The current situation regarding German ports is problematic, not only due to global supply chain hurdles caused by the pandemic and the war in Ukraine. For instance, a month ago, the port of Hamburg announced that it wouldn’t accept any export trains until further notice due to limited track capacity, already delayed trains, and reconstruction works. As a result, rail freight companies had to cancel numerous services, while in combination with some public holidays, the closure’s aftermath could be felt for weeks.

On top of that, the port strikes in Germany arrived a few days later. In early June, German dock workers’ associations called their members to a national strike that escalated in mid-June, causing havoc to the whole supply chain and all transport modes. The backlog of services rendered by the strikes was intensified by some impairments caused by a storm on 30 June and a traffic stop to and from Northern German ports by DB Netze on 2 July for unknown reasons. On top of that, a planned closure of the Elba Valley on 4 July worsened things even more.

The situation seems to be getting out of hand currently. According to METRANS, the rail operator that uses the ports of Hamburg and Bremerhaven heavily, the situation in the CTA Hamburg terminal, which has reached its capacity limits, affects traffic to other terminals too.

However, this is not the only problem. The operator stressed that “many of its rail assets are blocked in the ports causing a substantial lack of equipment,” affecting especially the train services to/from Rotterdam and Duisburg, which operate with a delay of up to 48 hours. “We may be even forced to cancel some of the import and export trains,” said the company.

Pretty obvious, now capacity of DB Net is not sufficient, neither Net is robust.
High utilisation of assets shall be provided for!
Investments, reinvestments, any construction work shall include a decisive upgrading!
(It is 2022 now and clients have shifted to On Demand.)
Electrification yes, but a timely. 32,5 ton safely allowed axial load now is a min., etc.
Shift at main lines can be within 10 years – and paying!