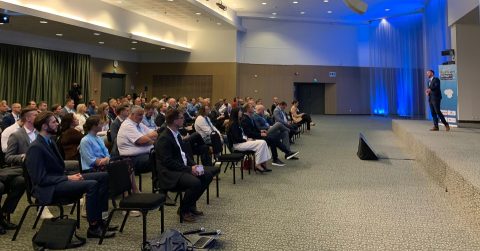 Poland’s capacity to handle grain cargoes, especially the new ones, from Ukraine is very limited. Halina Bajczuk, director of the commercial office at PKP Cargo, mentioned that the coming weeks and months would be critical, since Poland lacks the equipment and port capacity to handle Ukrainian exports. Would a transport coordination centre with Baltic countries be the solution?

Bajczuk mentioned that in a panel discussion during the RailFreight On Tour-The Lithuanian Edition that took place in Vilnius on 14 and 15 June. “From the coming weeks or months, we will not have the capacity – I mean containers – that the new grain cargo requires. So we need to cooperate. If you have spare containers for grain and other cargo from Ukraine, we shall do the transportation together. Unfortunately, there is no more place and additional capacity in the Polish ports, so we need to talk about using Klaipeda port and the Estonian and the Latvian ports.”

On his behalf, Mindaugas Skuncikas from LTG Cargo underlined that to increase the volume of grain cargo transportation from Ukraine to Europe through Poland, the countries need to finally find common ground on the decision to set up a single coordination centre. “The European Union is trying to do that. It would help a lot in getting more grains to come from Ukraine”, he said.

“Until last year, the transported volumes between Poland and Ukraine were not so significant, and our border crossings were not used so much. Concretely, we had one or two trains per day, and now we have around ten of them daily. A significant change”, Bajczuk underscored.

According to her, over the last five years PKP Cargo has significantly increased its capacity and made investments in its terminals, yet a contingency like war has not been considered. “What we see is that everything – from the customs to the border patrols and the railway logistics – has to be developed rapidly, which is not so easy and  causes certain strains making us work at maximum capacity,” she said.

“In 2022, export from Ukraine through the Polish border tripled compared to 2021, which shows how vital the border capacity for Ukraine is”, said Edvins Berzins from the Ukrainian Logistics Alliance Association, adding that the logistics could not be changed immediately. “We are certainly facing a shortage of capacity of the infrastructure on the European side – I mean locomotives, terminals, and so on”, he said.

But apart from changes in capacity, the situation is also different in terms of how companies approach it, said Raichmann from Estonian Railway. “The most significant change in rail logistics is that everyone speaks about companionship, not competition”. This counts not only for businesses but for the countries, too,” he said.

However, he didn’t miss the chance to note that this is not a universal truth. “Yet, with the sanctions in and the rules applying to all, it appears that some companies seek to keep the status quo they had before and interpret the rules very differently. That can be very frustrating. I see that happening in various ports and terminals – everybody is trying to find their way to deal with the situation. You can also call it competition or a fight for survival”, the Estonian Railway official said, implying that there is much space for improvement.

Bajczuk mentioned that, with all those limitations in place, cooperation between Poland and the Baltic States could be an efficient and practical solution. However, Skuncikas took it a step further. According to him, setting up a single transport coordination centre between states and companies would be the best approach. The EU provides the space for such a solution, which would allow more Ukrainian trains to cross the European Union borders much faster.

Nevertheless, to make this happen, everyone needs to think out of the box. “This means that if we can push the EU to deem Ukrainian grain cargo as its own, then each train would save one or two days in the transportation, which would be very significant”, he said.

Even if countries share the weight of Ukrainian exports and work together intensely, this would be a short-term solution. “But speaking of long-term, we need investments in logistics, in all the infrastructure, as well as new ideas to address the new situation”, Bajczuk admitted.

Berzins agreed that the war situation in logistics needs immediate short-term solutions: “We need new rules. They need to come in force right now, today. But in the long-term, the situation also allows us to do many things regarding train length and terminals. We should go forward faster – some see the details, but not the whole picture, the market. Already now, with the Commission’s guidance, we need to think of rebuilding Ukrainian infrastructure and building a new logistics corridor, which would mean much closer ties between Ukraine and Europe”, he emphasised.

Raichmann also agreed that the sides are speaking of short-term solutions. “The market is distorted now – by the sanctions and the new rules. We just cannot speak of a free demand-supply market right now”, he said. “As bad as everything may look, the positive side of the situation is that solutions can be very unconventional”, he underlined.