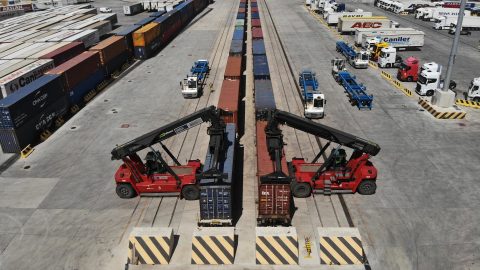 CMA CGM Group started a new weekly intermodal service from Trieste to Central and Eastern Europe this week with its subsidiary CEVA Logistics. The first train departed on 4 June from the terminal HHLA PLT Italy.

CMA CGM was already offering maritime services to the Italian port, linking with Ambarli, Gemlik and Gebze in Turkey as well as with Malta. The blocktrain offer allows an overland connection further into Europe. With this, the company is acknowledging the growing importance of the Adriatic port as a gateway to this part of Europe.

CMA CGM is not the first company to set up such a service. The Adriatic region is developing dynamically. This is partly due to the fact that new transport routes have been formed since the war broke out in Ukraine. The closure of the Black Sea, as well as the hesitance of shippers to transit through Russia has shifted interests towards alternative, sea-rail transport routes.

The port of Trieste has been among the ports at the forefront of this development. The port receives shipments from Turkey, with cargo from Asian countries. The port is ideally located to function as a transshipment hub for further overland transport to Central and Eastern European countries. The port has acknowledged this potential and is actively promoting its new role.