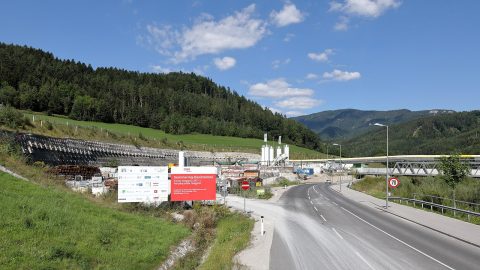 1st breakthrough of this new twin-tube tunnel in Austria

Tunnelling crews achieved the first breakthrough of the twin-tube Semmering base tunnel construction project in Austria on Friday. The hole-through moment came some seven years after the start of construction.

Work on the other tube is still progressing, with ÖBB estimating that there is less than 400 metres left to drill before the second breakthrough happens in the 27,3-kilometre-long tunnel between Göstritz and Mürzzuschlag.

Semmering base tunnel so far

While drilling activities continue, work has been underway since 2020 on build the concrete structures into the tunnel. Around 7 kilometres has already been completed. The tunnel is designed to alleviate of the Semmering Line, the oldest mountain railway in the world and the busiest line in the whole of Austria.

Once completed, the Semmering base tunnel will be a key element of the so-called Southern Line, which forms part of the Baltic-Adriatic corridor. ÖBB is carrying out a host of projects to modernise and expand the line. The tunnel is designed to allow train to travel at speeds of up to 240 kilometres per hour from 2030 onwards.

Want to know more about other major developments in the railway sector? Join us at RailTech Europe from 21 – 23 June. Click here for more information and registration.