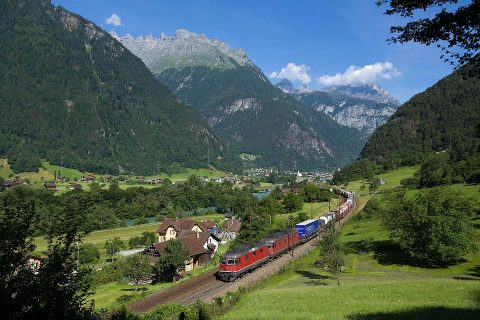 Rail freight traffic in the Rhine-Alpine corridor rose sharply in 2021, after major slowdown the previous year. This is according to the latest figures from the EEIG Corridor Rhine- Alpine EWIV, which has just published its annual report.

Overall traffic volumes increased by 7.84 per cent last year compared to 2020, but this represented a slight decrease of -0.3 per cent on 2019 levels, indicating that traffic had to a large extent re-established itself to pre-COVID-19 levels.

The findings published in the 2021 annual report of the Rail Freight Corridor (RFC) Rhine- Alpine show that ‘COVID-19 and multiple lockdowns across Europe were still a significant challenge’ last year and the corridor experienced a decline in performance for both freight and passenger trains.

Overall exit punctuality for the RFC Rhine-Alpine, with a 30-minute threshold, decreased from 59
per cent to 52 per cent in 2021. This compared to pre-pandemic performance levels in 2019
of 55 per cent.

Despite some challenges due to major incidents on the corridor last year – most notably heavy floods in Belgium and Germany in July, and total closure of the right side of the Middle Rhine Valley from March to May after a rockslide – the corridor saw some record traffic in 2021.

This rise was based on an increase in rail volumes of 13.4 per cent, helping to deliver the highest rail share in three decades, a level not seen since 1992. “In 2021, the COVID-19 pandemic still had many implications for the
European rail freight sector and continued to influence our work [but] in the second year of the pandemic, rail
freight and intermodal trans- port remained a very resilient mode of transport,” the report’s
authors commented.

One of the key infrastructure developments in the corridor last year was the opening of the elevated Theemsweg route, in the Netherlands, on the Harbour railway line. Launched in November 2021, the route runs from the Botlek yard in Rotterdam over a new railway viaduct before re-joining the existing railway track near the Europoort yard.

“The Theemsweg route significantly improves the accessibility of the Port of Rotterdam. Freight trains no longer have to wait for the Caland Bridge, which is opened several times a day for shipping traffic,” the report’s authors note.