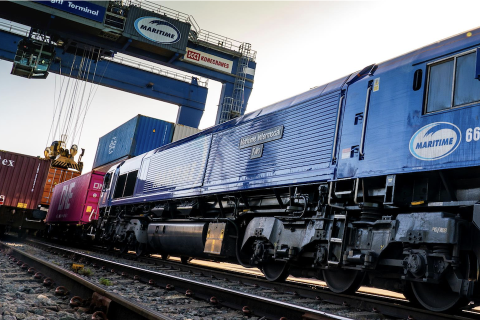 Maritime Transport has grown from a road-based logistics operation to be one of the biggest intermodal rail operators in the UK in just twenty years. Already moving around 5,500 containers every week, the company has ambitious plans to grow much further. It’s a tall order and director John Bailey says it faces significant challenges.

With potential for more than thirty new intermodal trains every week, Maritime’s familiar blue and white livery could soon be as prominent on the rails as it is on the roads of the UK. However achieving that growth presents more questions than answers. That hasn’t stopped the Compnay pressing ahead with plans to connect London with the North and Scotland, and several cross-country flows.

National assets as a showcase

Putting on trains is one thing. Putting in the infrastructure to handle them is an altogether more capital intensive matter. “Intermodal terminals are not cheap to build and not cheap to maintain”, John Bailey told an industry audience recently in Salford, Greater Manchester, organised by the Rail Freight Group, before hosting a visit to the company’s facility at Trafford Park. “The moral of the story is to present to the rail freight industry more often.” 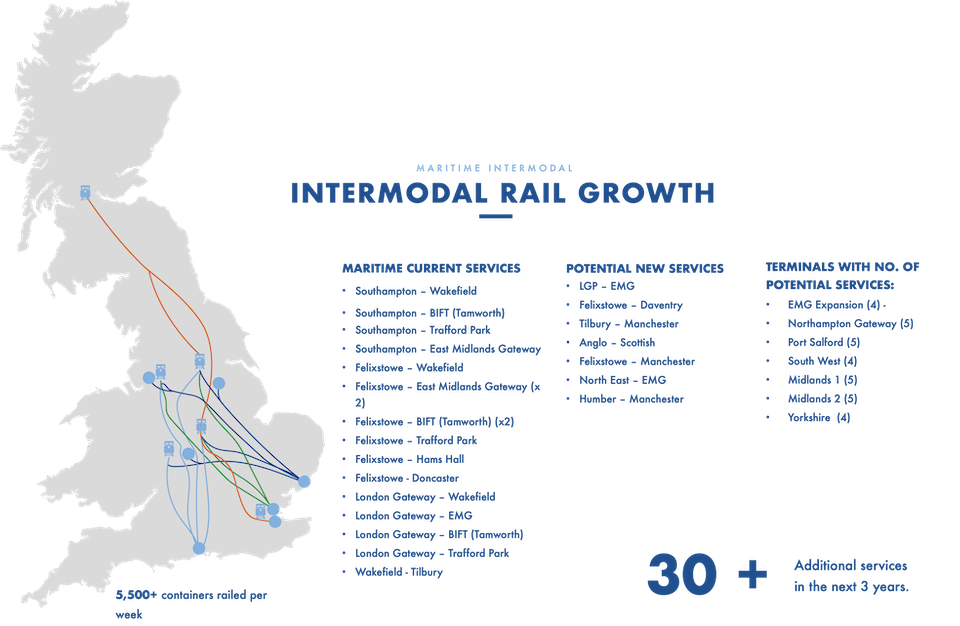 Bailey says that infrastructure is both a challenge and an asset for the logistics industry. Noting the ongoing issue of road driver recruitment, he said his company used its national assets as a showcase. “Operating from an intermodal terminal showcases the best of the driving profession”, he said, by demonstrating the best of the industry in one location. Although he did say that was no easy and challenges like getting enough electricity into a terminal was a substantial cost, quoting an electrical substation as in excess of five million pounds (5.82 million euro).

Undermining the case for rail freight

Innovation has not scared off Maritime. Despite something of a false start working with Coca Cola, the company is relaunching its service between London, Yorkshire and Scotland. The aim is to collaborate over a carbon-neutral policy between customer and carrier, and make better use of existing facilities.

“Expansion of East Midlands Gateway beings this summer, a one year project which will double its size. Other expansion plans are in progress”, says Bailey, who is however critical of the perception of warehousing as national infrastructure in their own right. “There is a lobby that rail connections are not entirely necessary, undermining the case for rail freight terminals. Consequently there are rail deserts like the south west [where warehousing provision is being progressed without rail freight built in.”

Focus, not a scatter gun

The long argued Northampton terminal will be built next year, challenges Bailey, but it will not be rail connected until 2024. He considers that a travesty. “It could take 80,000 trucks off the road”, he said.

“Technology in trucks is accelerating very quickly and we need to be careful that trucks do not become so attractive to operators that rail falls out of favour altogether. Adopt a focus. Not a scatter gun approach”, argues Bailey in conclusion. “Concentrate and get some projects over the line. It may not please everyone but we stand to please no one otherwise.”

However railways has got a bigger potential, for improving! (Capacity and utilisation now is at a, too “low and comfortable” level!) Infrastructure, by some reason remai, at same standard as before WWII.
Like other modes, load capacity has to be added. Safety against sudden broken wheels and axial has to be added. (Bottleneck of industry is the shortcomings, visavi trend among clients, the request for On Time supplies.) Urgently operators have to call for a timely, an upgraded infrastructure!