The test runs of the 838-metre long train took place on 8 and 9 May. The train covered a distance of 500 kilometres, loaded with 48 semitrailers carrying food products for Coop. Additionally, during the trials, the train operated with a four-axle locomotive and reached speeds up to 120 kilometres per hour-way faster than similar tests in other countries, said TX Logistik.

Not the first long train in Sweden

The 838-metre length of TX Logistik’s train sounds impressive, especially in the context of mainland European rail freight transport that has stricter restrictions when it comes to train lengths. However, it is not the first train exceeding 800 metres travelling on Swedish tracks.

Around this time last year, DB Cargo, DB Netze, Trafikverket and Banedenmark, the Danish infrastructure manager, partnered up and tested an 835-metre train between Maschen in Germany and Malmö in Sweden. The train transited through Denmark and the Öresund Bridge connecting the country with Sweden. This could be considered a historical event since this was the first time such a long train transited through this bridge.

In general, the train length limit in Sweden is up to 630 metres. An important exception is the Ore Line between Luleå and Narvik, where freight trains can be 750 metres long.

As for Coop, the service’s customer, it is not striking that it was involved in such a test. Coop has been transporting its produce by rail in Sweden for a long time, specifically since 2009. Since 2012, it has been cooperating with TX Logistik on the route between Bro, near Stockholm, and Malmö. Two years ago, the weekly roundtrips of this service doubled from ten to twenty.

“Today, 30 per cent of our transports are handled by rail”, emphasised Peter Rosendahl, transport manager at Coop Logistik. However, the company wants even more rail in its supply chain, which is why it participated in the specific project. “We hope to be able to extend our train lengths soon”, commented Rosendahl. 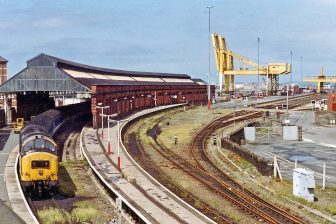 Freeport bid coming down the line for North Wales

Yes, all other devices, as global, by air, by sea and even the on road trucks add load capacity, for reducing costs, etc., so a further upgrading as at referred Ore Line allowing for 32,5 ton axial load, etc., urgently now has to come.