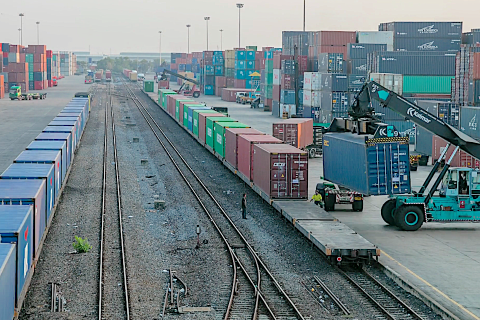 UK specialists: ‘Growth in rail freight starts with the infrastructure’

Rail freight has rebounded strongly from the pandemic, backed by underlying growth. That is the message from a panel of industry experts debating the sector’s future at a recent round-table in Edinburgh. Rail insiders, industry observers and government representatives have told a cross-section of professionals and their customers that the future is bright for rail freight.

The gathering, organised by the Rail Freight Group, the industry’s representative body in the UK, heard that there were clear statistical indications favouring rail freight growth over road transportation. However, there is still a gulf between the tonnages moved by each mode, and rail freight is significantly behind. Plans and legislation are in hand to close the gap and promote modal shift, but it will take effort.

Paths for all that extra freight

Speaking for Transport Scotland, the agency of the government in Edinburgh, Bill Reeve, their director of rail, told the panel that the ambitious targets set by the Scottish government would have a positive impact, not just in Scotland. He said that the Scottish industry would need to generate between thirty and forty new cross-border rail freight flows every day to meet those targets. This was in response to a figure quoted to the panel that 37 per cent of carbon emissions in Scotland were due to transport operations and that heavy goods vehicles on the main M74 highway between the industrial Central Belt of Scotland and the markets in England were a significant contributor.

The M74 parallels the West Coast Main Line and is busy with trucks round the clock. Trains are the answer, but finding paths for all that extra freight on the busiest mixed traffic route in Europe would be difficult enough at the best of times. The expected introduction of Anglo-Scottish passenger services fanning out from HS2. Rolling out over the coming decade possibly does not represent the best-case scenario for additional freight traffic. The speculation is that more capacity will be needed on alternative routes, strengthening the case for upgrading other routes between the border and Glasgow and potentially the long-lobbied reinstatement of the direct line between Carlisle and Edinburgh.

Extra rail freight traffic sounds like music to the ears of the industry. For operators on the WCML – Freightliner among them – it’s a pleasant headache to have. Peter Graham, who, as a rail strategy manager at Freightliner, is focused on policy and regulatory affairs, is well aware that it is a tall order to deliver the ambitious targets laid out in legislation in the parliament in Edinburgh. He says the key is collaboration across the entire logistics chain.

Scotland’s mixed approach to electrification is welcomed. It casts aside the ‘wires everywhere’ approach for a range of more diverse solutions more suited to the spectrum of demand. This is helpful for rail freight too. Whether it be traditional overhead supply for multi-modal terminals in Glasgow to hydrogen power in the sparsely populated Far North, there is an infrastructure welcome being extended to rail freight to help reach every community.

The willingness of Scotland to embrace every aspect of the rail freight industry is being driven by legislation but also by demand. Passenger traffic has not recovered to the same extent as freight traffic post-pandemic. The pattern is also smoother, with less differential between peak and leisure travel periods. The panel agreed that Scotland’s coherent electrification policy was building up a legacy for the future.

Scotland represents only a small fraction of the overall rail freight traffic in the UK – but Anglo-Scottish flows are among the longest hauls in the country. According to the operators, more electric traction would be ordered if there was more of an electrified network. It makes it difficult to invest in electric locomotives, they say. If the network management in the rest of the country wants to do the best for the industry, then they say the incoming Great British Railways could do worse than follow Scotland’s lead.

Yes, for railways, by nature, simply infrastructure is basics. For max utilisation, of all assets, therefore untimely techniques, shall no longer be installed, but decisively shifted out – as steam was 100 years ago, etc.
On time supplies is requested and handsomely rewarded, by clients, ware owners, that have shifted to On Demand.
Capacity at existing lines urgently has to be added.
(For majority, currently on road trucks is single available alternative.)

“No Train No Gain” (Railway News). Take it to the next level & utilize the excess capacity in track systems (voids between trains/trams – a part of sunk cost).Add a “Trunk-Feeder” & “City-Feeder”, cargo-parcel-postal service & generate massive fixed revenues for the system, expose the unnecessary costs of duplication in conventional distribution designs, & add huge gains from multiplier effects. Note the test by Orion at Euston Station.