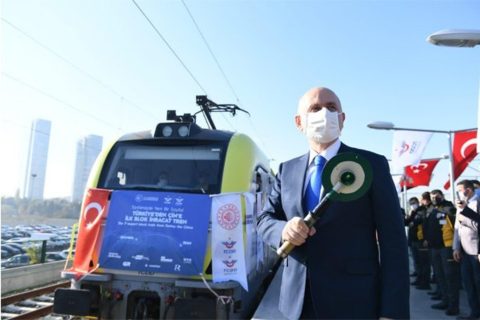 Turkey is pouring 198 billion US dollars into its transport sector, and rail is the big winner. “Turkey will become a logistics superpower by 2053”, claimed Turkish president Erdogan. “The Turkish railway network will more than double in railway line capacity by then”, emphasised transport minister Karaismanoglou.

The Turkish government attempts to boost Turkey’s logistics profile. The country has become increasingly important during the last couple of years. Recently, the focus on the Middle Corridor, as an alternative to the Russian Silk Road route, highlights that “Turkey has a clear road ahead to being a logistics superpower”, as Erdogan said.

Turkey has announced the ‘Transport Vision 2053’, part of which will be the 198 billion dollars investment in the transport sector. “Our 30-year plans are ready to enable Turkey to take its rightful place among the world’s top economies. We will invest 197,9 billion US dollars in rail, road, maritime and air transport and communications by 2053”, stressed Karaismanoglou.

As part of the project, “the share of railway transport in the Turkish passenger and cargo network will be increased”, underlined Karaismanoglou. Specifically, concerning rail freight transport, the minister mentioned that he expects a sevenfold increase in the market share by 2053, from 5,08 per cent as projected for 2023 to 21,93 per cent.

On top of that, the Turkish railway network will expand significantly until then. “During the last two decades, the railway network has reached a total length of 13,000 kilometres. Until 2053, the target is to reach 28,590 kilometres of railway lines”, explained Karaismanoglou.