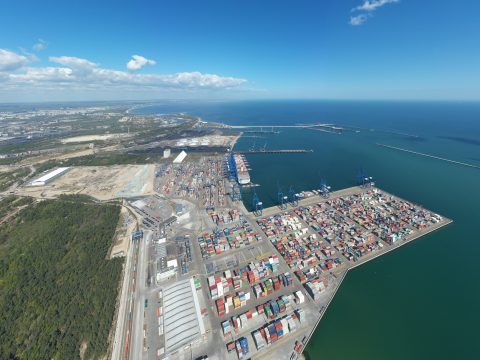 Improvements in the rail accessibility of Gdynia and Gdańsk ports have started taking shape. Works on Gdańsk’s rail infrastructure are complete for the biggest part, while in Gdynia, they are halfway through. The two Polish ports are set to benefit from the modernised infrastructure with “longer and heavier trains”, said Arnold Bresch, member of the management board of PKP Polskie Linie Kolejowe S.A.

The rail infrastructure investments in Gdynia and Gdańsk are made by the Polish infrastructure manager PKP Polskie Linie Kolejowe SA and are co-financed by the Connecting Europe Facility (CEF) EU funds by 40 per cent. The project aims to improve rail connectivity between the two ports and the rest of the railway network. Its total worth is approximately 558 million euros (2,6 billion PLN).

In the port of Gdańsk, where construction is almost finished, works resulted in the building of 72 kilometres of new railway lines that enhance connectivity between terminals in the broader Gdańsk-Gdynia metropolitan area and the port terminals. “The improvement of rail access to the port of Gdańsk also includes the modernisation of 13 rail-road crossings and the reconstruction of engineering structures comprising 3 bridges, 2 viaducts and 18 culverts”, said infrastructure manager PLK.

In Gdynia, works will be complete in the second half of 2023. So far, construction has resulted in 70 kilometres of new railway tracks. Now it’s entering the next phase with stabilisation works for the lines’ substrate and the installation of overhead lines. More importantly, PLK informed that “two new railway viaducts are built to facilitate access to the port. The first will have four tracks, while the second and longer one will have one track”.

But what do these investments mean in practice? ”Thanks to this project, the number of loads transported on the railroads will increase compared to those transported by road”, commented Jacek Sadaj, president of the Port of Gdynia Authority, pointing out that better rail accessibility will translate to a facilitated modal shift in Poland. “Longer and heavier trains, even 750-metres long, will travel to the newly constructed rail quays, therefore, carrying more goods.”, said Arnold Bresch, member of the management board of PKP Polskie Linie Kolejowe S.A.

Accompanied by road and sea projects

“Thanks to the modernisation and construction of railway crossings, ports will be able to gain new contractors and increase transshipments, which are already breaking records today”, said Dariusz Drelich, governor of the region of Pomerania, where the ports are located.

However, there are more infrastructure projects enhancing rail activities in the region. Despite targeting road and sea infrastructure, Drelich says that they are intertwined with the rail efficiency of Gdynia and Gdańsk. “The expansion of the ring road S6 or the waterway through the Vistula Spit is a transport frame of colossal importance for the ports. If not for the development of roads, they would not have such prospects. It is very important that railway investments accompany the modernisation of roads”, he concluded.