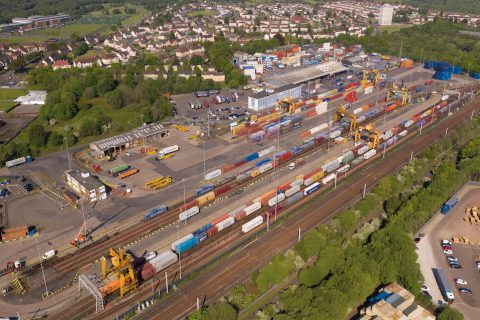 A brand new service will help Scottish producers and manufacturers reach worldwide markets. Saturday saw the first departure of a new intermodal service operated by Freightliner. The train conveys containers from the company’s Coatbridge terminal in central Scotland to the recently expanded London Gateway terminal on the River Thames.

The new express service is, according to Freightliner, responding quickly and at short notice to customer requirements. Freightliner say they will operate at a capacity of 26 wagons per train each weekend, hauling goods weighing around 1,800 tonnes. The mixed loads will be manufactured in Scotland for global export. The services will operate via the West Coast Main Line, and will be diagrammed for electric traction.

Scottish manufacturers have been keen to expand their global presence, ever since the Brexit decision made access to European markets more difficult. Rising road fuel prices have made shipments to ports in the south of England more expensive, so there has been growing demand for better rail connections with English ports. Typical export products from Scotland include high-end finished textiles, foodstuffs and specialist machined components. “This is brilliant news! Supporting Scottish global exports and the decarbonisation of supply chains”, said Anne MacKenzie, Senior Route Freight Manager at Network Rail, amid a raft of supportive online comments.

The new service not only goes a lone way towards answering the needs of the Scottish economy, it also provides a connection directly into the established freeport hosted jointly by the ports of London Gateway and Tilbury. Scotland does not have any designated freeports (geographical areas subject to certain legislated economic advantages) but the government in Edinburgh is working to adopt a slightly different ‘greenport’ model, with enhanced environmental requirements. It is conceivable that Freightliner’s new link could, one day, connect greenport and freeport directly by rail.

For now, Freightliner has expressed delight at inaugurating the service. “In an effort to decarbonise their logistics chains, we are receiving increased enquiries from customers and potential customers who recognise the environmental benefits of moving more goods by rail”, says their statement. Freightliner also says it supports the development of freight carrying capacity north of the border. “The continued investment in Scotland’s rail network will help attract even more volume to rail”, they say.

The company has been planning for expanded operations for some time. Their ambitions have been documented in previous RailFreight video presentations. Since then, Freightliner have taken delivery of a fleet of new generation intermodal wagons, capable of delivering high-cube containers across a wide part of the UK network. The wagons allow containers to be delivered via routes cleared for W10 dimensions, which represents most of the UK freight corridors. Freightliner already claims to be the largest UK freight operator of electric locomotives. Their fleet includes a rake of the former passenger express class 91 locomotives, examples of which will be deployed on this new service. It is understood that planning for the new service was carried out by rail freight consultancy specialists Intermodality.

Except they’ll need diesel haulage to get them into Gateway.