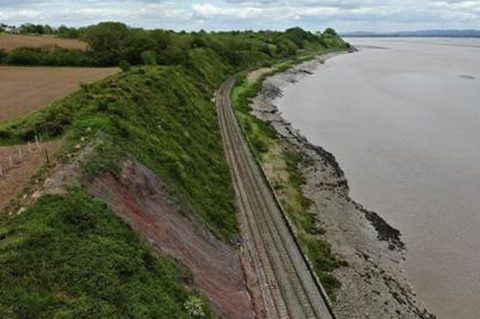 Almost fifty weekly freight trains will continue to run on a section of the railway closing to passenger services during a seven-week engineering programme. The Severn Estuary line between Gloucester and the Welsh border town of Newport urgently needs work to stabilise steep cuttings and protect the line from potential floodwaters. The works, to be carried out over the summer, will see passenger services suspended, but vital freight traffic will be allowed to run overnight.

What Network Rail has described as a critical route has suffered several landslips in recent years, and they put it down to increasingly extreme weather conditions. Of particular concern is a cliff face section, about five kilometres long, which the original builders steepened to accommodate the railway in a narrow corridor between the high ground and the River Severn.

The works are part of a 25 million pound upgrade programme (30 million euro). The cost-benefit is weighed against five major landslips in the last two years alone, which closed the line for lengthy periods. Richard Griffiths, Network Rail head of communications for Wales and Western, told local media that the line connects South Wales through the West Country up to the Midlands and the North of England. “We need to protect the line for the future,” he said.

Similar works are common across the network. Remedial civil engineering teams are a frequent sight. Although on a smaller scale, a recent project was carried out on the West Coast Main Line near Lockerbie in Scotland, demonstrating some of the techniques to be employed in Gloucestershire.

Historically, Britain’s nineteenth-century railway network was built on the cheap. Promoters typically bought as little land as possible, putting railways in narrow corridors, often necessitating steep earthworks and cuttings. Many of these early Victorian works are no longer fit for purpose and are the subject of expensive and constant maintenance. Tragically, they are also a factor in accidents, such as the fatal crash at Carmont in Scotland two years ago.

Modern builds, such as the massive HS2 project, are subject to much more rigorous building control standards. These regulations necessitate much greater land purchases and much wider construction corridors. Former rail corridors that many communities campaign to be reopened have been hampered by constraints imposed by trying to accommodate safe, modern operations within the old, almost two-hundred-year-old alignments. For example, the Borders Railway in Scotland posed significant challenges for engineers in overcoming such obstacles. While engineers praised the actual civil engineering works (bridges, tunnels), the land solum posed difficulties for those seeking to rebuild the original double-track line.

Mixed freight traffic and a year of works

On the Severn Estuary line, works will include extensive soil nailing and steel curtaining. Around 30,000 tonnes of material will be removed during the works. The overall upgrade programme will run well into 2023.