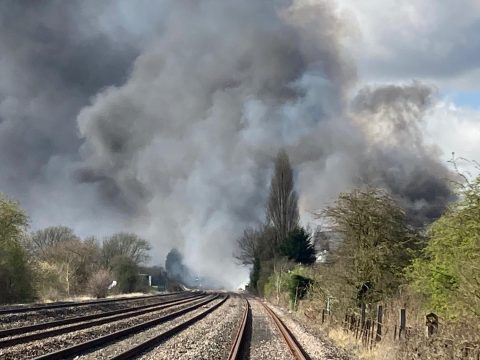 An animal feed factory was totally destroyed in a major blaze at the end of last week. Fire fighting services in the region were at full stretch to contain the blaze, which required the closure of the Derby-Birmingham railway line. The mixed-traffic route forms the major connection between the East and West Midlands, and is central to the ‘CrossCountry Trains’ passenger network.

Emergency services spent last Thursday dealing with a line-side fire, rather bigger than usual. The blaze at the factory of Rumenco, an animal food-stuffs manufacturer, brought services to a halt just north of the depot in the town. The works is directly adjacent to the line, which had to close for obvious safety reasons.

Stranded passengers, at the town station two kilometres away, could clearly see the huge plume of black smoke rising into the air. “The major fire began in the early hours of Thursday 31 March”, said Network Rail in their alert which closed the line all day. “This meant that trains in the area had to be stopped or diverted to keep everybody safe.”

The line is a busy mixed-traffic route, carrying bulk and intermodal traffic. The line also carried local and long distance passenger traffic from as far afield as Aberdeen and Plymouth. Engineers were required to wait until the fire had been fully extinguished before assessing the line for any damage. “It may have caused to signalling equipment or power cables”, said Network Rail. “Due to the nature and location of the fire, it could be as late as Saturday night before this can be done safely.”

West Midlands Ambulance Service, who participated in the emergency, said there were no reported injuries. CrossCountry Trains confirmed that by the weekend services were running normally.