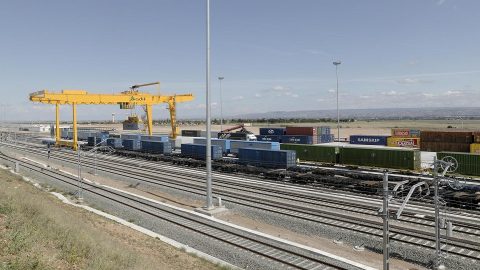 The Spanish infrastructure manager Adif awarded a 2,2 million euros contract to study and adjust the track gauge between Zaragoza and the port of Algeciras. With plans foreseeing the launching of a rolling highway between the two destinations, gauge adjustments are critical to facilitate cargo movement, said Adif.

Zaragoza is an important node for rail freight transport in Spain. It’s a core part of the railway network connecting the ports of Barcelona and Valencia with the Iberian hinterland and destinations in the Spanish north, while it also is one of the terminals before crossing the Spanish-French border.

On the other hand, the port of Algeciras is the Spanish gateway for cargo coming from afar, with sea services from Southeast Asia and China arriving there. The Zaragoza-Algeciras route is also important in continuing with cargo to Northern Africa since the route can extend via short-sea to Marroco.

Adif has plans to launch a rolling highway between the two destinations. To ensure that such a plan is feasible, the IM needs a draft of reconstruction projects related to the line’s track gauge to make combined transport easier. The Temporary Business Union (UTE), comprising SERS Engineering and Architecture Consultants, Fulcrum Analysis and Project Planning, Carlos Fernández Casado and Eptisa, Engineering Services, will undertake the task.

Overpasses under the microscope

The railway network’s points that will be studied are mainly railway overpasses that are not suitable for the operations of a rolling highway. Specifically, the section between Malaga and Zaragoza is the most critical part that reconstructions will transform to make the connection to Algeciras efficient.

In total, the study will tackle the adequacy of 361 overpasses along the Malaga-Zaragoza route. For overpasses that do not meet the needed requirements, because it does not mean that all of them are unfit, there will be another round of extensive studies to determine the reconstruction needs and come up with concrete solutions.