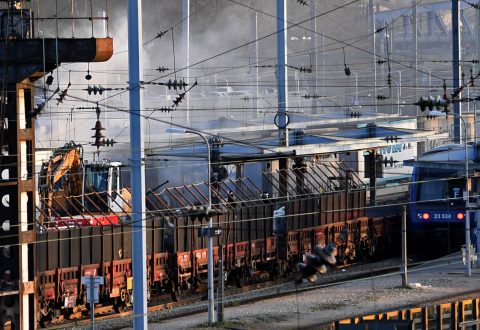 Migrant dies on top of freight wagon after electric spark

Published on 28-03-2022 at 11:22
This photograph taken on March 25, 2022, shows smoke raise from a burnt wagon at Valenciennes train station after one person died and three were slightly injured in a accidental fire in a freight wagon, according to the SNCF, in Valenciennes northern France. The firefighters later confirmed the death, and also reported "three slightly injured people, obviously migrants", found on the platform near the burnt wagon. FRANCOIS LO PRESTI / AFP

An Eritrean migrant was electrocuted and killed after jumping on a freight wagon at the train station of Valenciennes in France on Friday. The freight wagon got an electric spark, which resulted in a fire. The three companions of the victim, as well as an SNCF employee and two firefighters were injured in the accident.

The freight train leaving the station in the North of France was headed for Calais, a departure point for the underseas tunnel to the UK – EuroTunnel. Calais is a known place for migrants to hop on the train illegally, in an attempt to make it to the UK. Valenciennes is a lesser known ‘hop on’ spot.

Fatalities on the train

Fatalities involving trespassers on the train are, unfortunately, not uncommon. More than half (61 per cent) of the fatalities from railway accidents in the EU involve unauthorised persons and trespassers. Migrants are a well-known group among them. In their attempt to travel to another country illegally, they jump on and off moving trains (often freight trains), hide inside trains or walk on the tracks.

All of these come with huge risks, explained Isabelle Fonverne, Senior Advisor of safety and interoperability at UIC earlier. Only last year, a train running in northern France hit a group of migrants walking along the tracks near Calais on Thursday, killing one person and injuring three others.

Several organisations have attemted to raise awareness about the risks. The UIC last year launched the TreSP-Network, a working groupwith the aim to create an international and permanent platform to tackle railway trespass and suicide prevention issues, exchange best practices and release guidelines and organise annual or bi-annual international awareness campaigns and conferences.

According to Fonverne, preventing trespassing is a difficult thing to do, as it is impossible to supervise all trains leaving, especially freight trains. And often, migrants get on the train after departure, when the driver will have his or her eyes on the tracks.

Eurotunnel tried in 2015 to address the increasing number of migrants using the tunnel to reach the UK. It spoke of a fence and additional inspection of the trains, as it counted more than 37,000 migrants trying to illegally cross from France to the UK in the first half of that year alone. It is not clear whether these measures have helped to reduce the number so far.

In Calais, another form of awareness was raised on Sunday, by migrants themselves. About fifty people, representatives of associations and migrants, paid a silent tribute to Eritrean migrant who died on the freight car in Valenciennes.

Perhaps the story of others that did not make it is the most compelling warning of the risks that come with the illegal train journey.