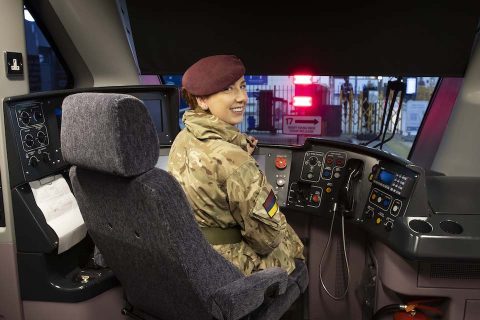 The British Army is on the move. You will not find any overt reference in the working timetable, but you may come across special services, departmental relocations and unusually lengthy one-way workings. The British Army may not be as big a body of troops as it once was, but that doesn’t mean it gets around in the back of a Transit van. When troops move, you’ll still find the olive drab livery of military machinery moving around the British railway network.

Bringing the men and materials of the UK armed services to their operational staging posts around the British Isles has historically depended on the railways. While it may be a discrete operation these days – as discrete as a train load of battle tanks can be – it is possible to spot the hardware of warfare mounted on the back of a flat wagon, if you know where to look.

The obedient and well-trained troops of the British Army have always been the most desirable of ‘self-loading cargo’. If only the average commuter could be as regimented on the platforms of Aldershot, Colchester or Edinburgh, very few station managers would have any complaints. The regimental boots and the necessarily sharp-edged equipment aside, a train-load of troops, heading from barracks at St George’s to Southampton embarkation represents the sort of very short term planning operation upon which planners thrive.

In a branch of railway operations that necessarily keeps its movements unheralded, there are some movements that have become not just noteworthy, but celebrated. Perhaps the most famous of all is the so-called “Jellicoe Express”. During the Great War, this frequent movement took troops and materiel from points in the south of the UK, all the way to the far north of Scotland, where sailors would join navy ships, at anchor in Scapa Flow. Named after the admiral of the day, a commemorative memorial was recently commissioned in Hawick, in the Scottish Borders. The town, although no longer served by rail, was a staging post where most of the services stopped for refuelling on the 700-mile (1320km) journey from the south coast ports.

The British Army isn’t on the ground in Ukraine, but that doesn’t mean it isn’t on the move. The Ministry of Defence has already made public details of forward deployments. “Tanks and armoured vehicles of the Royal Welsh battlegroup have arrived in Estonia from Germany, with further equipment and around 1000 troops arriving over the coming days”, said a spokesperson in an official statement. “This will lead to a doubling of the UK presence in Estonia, where the UK leads a NATO battlegroup as part of the Alliance’s enhanced Forward Presence.”

Forward movements like this entail a ‘back fill’ operation, that goes right back to the barracks and bases in the UK. In the past, that may have meant huge operations from the rail-served depots, like the former installation at Longtown near Carlisle. It could also have meant an increase in logistics traffic to naval base like Rosyth, near Edinburgh, which still has in place a dedicated branch line, currently dormant. Today, that means a special operation for rail freight operators, often covering long distances at short notice.

Movement of troops not publicised

Peacetime operations do still generate individual movements by rail. Of note, there are Scottish-based soldiers who train on the Army ranges in Salisbury Plain. When they move from barracks north of Aberdeen, their entire compliment of vehicles and stores go with them, much of it by rail.

However, unless your press credentials have the suffix “defence correspondent” then too many questions about the movement of troops via the rail network and the the Logistic Delivery Operating Centre may entitle you to a personal visit from the Ministry of Defence. That generally doesn’t mean the press officer will be calling round for tea and biscuits.

Featured image is of Officer MacNeil of 16 Medical Regiment at the controls in London Liverpool Street station.