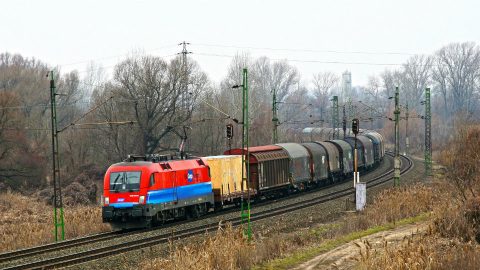 Traction prices of rail freight in Hungary are going to be higher than estimated. The high prices are a direct result of the rising energy costs, but pose a challenge to the rail freight industry, which has turned to the government for help.

In December, the rail freight industry already expressed its concern over the high prices, which were then estimated to be HUF 110-120 per kilowatt hour for January and February, and an annual average of HUF 92.32. However, it now seems that railway undertakings should expect rates of around HUF 160 for January and HUF 175 for February, according to VG, an Hungarian media source which asked several operators.

According to industry association Hungrail Magyar Vasúti Egyesület, this will affect the competitiveness of the rail transport sector and have a completely opposite effect in terms of achieving climate protection goals. “With this increase, railway companies operating on the infrastructure of MÁV Zrt. must provide services at the most expensive traction energy price in Europe”, the group said earlier.

In December, the industry body warned of a nearly 300 per cent increase in the price of traction energy from January 2022 if the government did not intervene. The need to intervene has now become even more immediate.

At any moment, the Hungarian rail freight market could collapse due to the explosion in electricity prices”, Hungrail and 20 railway companies said in a joint statement. “In the joint proposal, we ask the Government to compensate for the difference between the average price of traction energy in 2021 and the current traction energy price”, commented managing director of the company Lajos Hódosi.