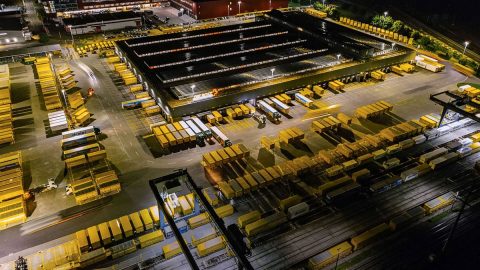 Mail keeps finding its way by rail in Switzerland

Published on 15-02-2022 at 11:47
Bird's-eye view of the Härkingen parcel center (SO). Here, rush hour is the night, when trains and trucks come and go incessantly. (Copyright to all images: Yves Bachmann)

SBB Cargo and the Swiss Post are continuing their long-standing partnership. Letters and parcels will travel on rail tracks for another four years in Switzerland since the two companies extended their partnership until 2026.

SBB Cargo won a public tender launched by the Swiss Post in January 2022. “We are delighted with the contract extension,” commented Johannes Cramer, head of logistics services at Swiss Post, underlying his company’s commitment to rail and sustainable transport solutions.

The two partners want to use their shared experience and build on it. “We depend on rails for high quality and punctuality to provide our services reliably. Both are the focus of our proven cooperation,” said Cramer. For years they have been doing that with SBB Cargo, but the goal for 2026 is even more impressive. “By the end of 2026, SBB Cargo will be transporting 60 freight trains with letters and parcels across Switzerland for Swiss Post every day, saving around 183,550 truck journeys,” said the rail freight company.

Mails on the rails

The numbers are pretty impressive in the case of Switzerland. However, more instances prove that shifting post and parcel volumes on rail contributes to the sustainable development of light and short-distance logistics. In Germany, for example, DB Cargo and DHL have been cooperating for 21 years already, while they recently expanded their partnership. 2 per cent of DHL’s parcels in Germany are travelling on freight trains. Their shared goal is to increase this percentage tenfold and expand their collaboration in other countries.

Moreover, in the UK, the Swift Logistics project launched by Eversholt points in the same direction. The company plans to convert redundant passenger multiple unit rolling stock into high-speed light goods trains. Passenger wagons will be used to transport parcels or other mail quickly and efficiently. Orion High Speed Logistics, however, already implements such plans in the UK. Last November, the company sent off its first parcel train connecting Glasgow and London.