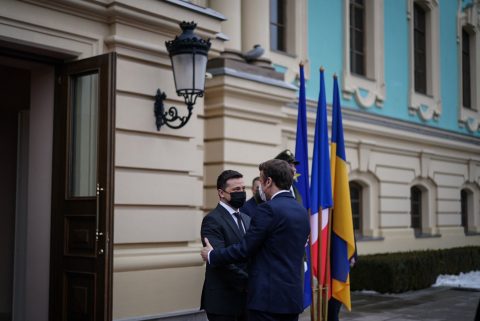 Under the presidential gaze, Oleksandr Kamyshyn, Chairman of the Board of Ukrainian Railways, and Henri Pupar-Lafarge, CEO of Alstom, signed the cooperation protocol, which has been negotiated since 2018. Their agreement includes the supply of 130 new locomotives from the French company to the Ukrainian state railway operator, 50 of which will be electric locomotives running on alternating current and 80 dual-system locomotives which can run on both alternating current and direct current.

Their agreement resulted from a three-year negotiation between the two sides and is part of “a wider French-Ukrainian macro-financial support package,” said the Ukrainian Ministry of Infrastructure. Coming in a quite “turbulent period” for Ukraine, as Oleksandr Kamyshyn said, this cooperation might also be a clear political statement.

“The signed agreement will allow us to get much-needed electric locomotives under the best possible conditions in today’s turbulent times. The use of Ukrainian companies and specialists in the construction and maintenance of machines will also bring a unique experience to Ukraine. There is still much work to be done to discuss technical details, but most of the negotiations are behind us,” said Oleksandr Kamyshin.

Apart from the macro-financial support package between France and Ukraine, the fleet renewal will also contribute to Ukraine’s “Big Construction” program, which includes infrastructure upgrades and the revamp of the country’s locomotive fleet since 95 per cent of it is worn out. But is that all?

Ukrainian Infrastructure Minister Oleksandr Kubrakov provided a clear answer. “This is not just an agreement on the supply of locomotives – this is Ukraine’s integration into the economic system and transport network of the European Union,” he said. Considering the “turbulent period” Ukraine finds itself in, this could indeed be much more than a purchase agreement.

By strengthening its bonds with France, a leading EU and NATO member, Ukraine sends clear signals towards Russia. The Eastern European country shows its EU-friendly intentions and commitment to Western economic and transport alliances while France simultaneously indicates its support to the country.