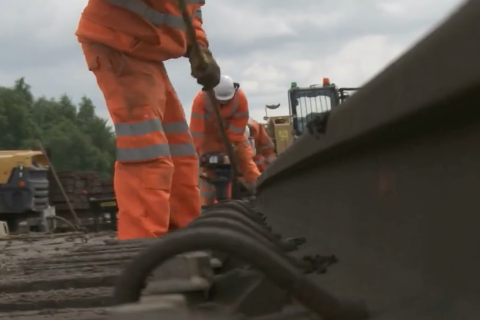 It has been just over ten years since a virtually redundant marshalling yard in the east of England found a new purpose as an industrial recycling centre. At the time, turning Whitemoor in Cambridgeshire into a high-tech reprocessing and recovery operation was intended to save money for Network Rail and its infrastructure contractors. A decade on, the environmental advantages now outweigh the financial ones.

The green and environmental agendas now dominate the political agenda. Far from just being a fringe activity, reducing environmental impact has become a central part of the Network Rail business plan. The site at Whitemoor not only undertakes base level materials recycling but is also a centre for complex track refurbishment, increasing the useful lifespan of critical switching and crossing components (S&C).

The current operators of the site, GB Railfreight, have recognised the importance of the environmental impact of rail operations. They recently took delivery of a hybrid shunting locomotive, delivered by UK manufacturer Clayton. There is plenty of requirement for shunting operations. Typically, around 50 wagons loaded with materials arrive weekly, with twice that number in busy times.

The materials are graded and sorted into what can be reused on the network and what can be sold on. There is demand from the construction industry for railway aggregates, for example. GB Railfreight ran around 100 trains between the site and London Kings Cross station during the recent remodelling works at the East Coast Main Line terminal.

Whitemoor has been a railway centre since the 1920s, although the site was moribund for almost two decades until 2004 when limited marshalling operations resumed. The significant shift in emphasis came in 2011, with the commissioning of the recycling plant, as part of a new approach to used railway materials. “Recycling is so important to us”, said a Network Rail manager. “The team at Whitemoor work really hard to create a service that allows us to visibly clear line sides of redundant materials, making it a tidier and safer railway.”

Network Rail also has two other materials handling depots, at Crewe in the northwest, and at Westbury, on the junction of lines between London and Exeter and Bristol and Southampton. However, Whitemoor is the largest and has facilities that the other locations do not share. Principally these include ballast washing and specialised equipment to refurbish switches and crossings.