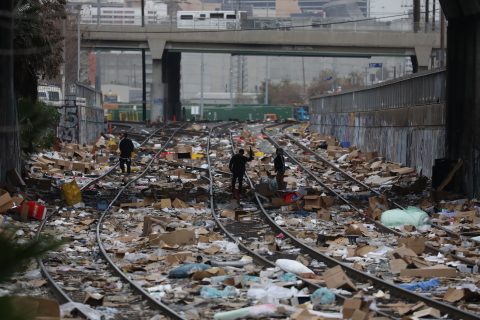 Published on 20-01-2022 at 09:36
People gather stolen goods from thousands of opened packages littering the train tracks after being looted from a Union Pacific line hauling Fed Ex, Amazon, UPS and other box cars through the Lincoln Heights area of Los Angeles, California, USA, 15 January 2022. EPA/DAVID SWANSON

US rail freight company Union Pacific has highlighted a sharp increase in cargo theft from its trains in Los Angeles County over the past year. In 2021, there was a 160 per cent increase in theft from cargo trains. Parcels from Amazon, UPS and FedEx are among the culprits.

Looters appear to be taking advantage of the current supply chain chaos in the US, which sees bottlenecks in the inflow of goods outside of the two southern California ports, Los Angeles and Long Beach, that are responsible for handling almost half of all US imports.

Interviewed by CNN on the spike in cargo thefts, UP’s general director of Public Affairs for California and the Pacific Northwest, Adrian Guerrero, noted that it “has intensified actions to address the serious situation” and that the “problem requires a collective effort.”

Union Pacific (UP) revealed that over the past year, rail thefts have increased by 160 per cent in Los Angeles County and have spiked in the past three months during the holiday peak season. In October 2021 alone, thefts from UP trains increased 356 per cent compared to October 2020.

The rail company launched an aggressive response to the cargo thefts by investing in both new technologies and extra staff, but according to the organisation more needs to be done to punish the thieves for their actions.

Keep hearing of train burglaries in LA on the scanner so went to #LincolnHeights to see it all. And… there’s looted packages as far as the eye can see. Amazon packages, @UPS boxes, unused Covid tests, fishing lures, epi pens. Cargo containers left busted open on trains. @CBSLA pic.twitter.com/JvNF4UVy2K

Union Pacific has 1,600 employees covering 275 miles of track at its nine rail facilities throughout Los Angeles County. In response to the cargo theft spike, it increased the number of police assigned to protecting the targeted areas in Los Angeles County, and implemented drone surveillance, specialized fencing, and trespass-detection systems.

“UP agents have made hundreds of arrests, but less than half are booked, and some are released in less than 24 hours,” Guerrero said. “In addition to UP’s efforts, partnership with local and state law enforcement and elected public officials is essential.”

Back on the street in 24 hours

In a letter to Los Angeles County District Attorney at the end of last month, Guerrero wrote: “Criminals are caught and arrested, turned over to local authorities for booking, arraigned before the local courts, charges are reduced to a misdemeanour or petty offense, and the criminal is released after paying a nominal fine.

“These individuals are generally caught and released back onto the streets in less than 24 hours. Even with all the arrests made, the no-cash bail policy and extended timeframe for suspects to appear in court is causing re-victimisation to UP by these same criminals.”

The letter added: “This increased criminal activity over the past twelve months accounts for approximately 5 million dollars in claims, losses and damages to UP. “And that value does not include respective losses to our impacted customers,” Guerrero added. “Nor does it capture the larger operating or commercial impacts to the UP network or supply chain system in Los Angeles County.”