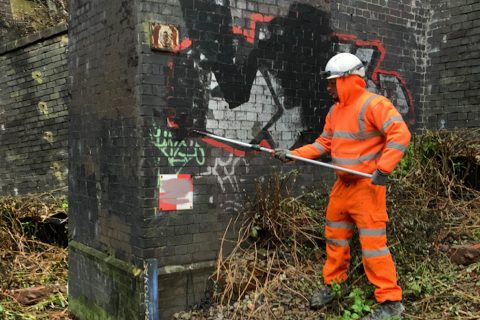 The British railway network is not unique in its exposure to criminal activity. Theft and vandalism disrupt services in almost every part of the country. Operators are well aware of the damage done to rolling stock, and infrastructure is also targeted for attack. However, Network Rail and operators cooperate with law enforcement and security to meet the issue head-on. Network Rail has been tackling one issue lately, which is highly visible to all rail users.

To some, graffiti is an art form, but it is considered unsightly criminal damage to the vast majority. More importantly, despoiled railway property attracts further acts of criminality. That can mean safety led service disruptions and is often extremely dangerous for the perpetrators. One additional issue is often the hazardous practice of illegal dumping, also known as fly-tipping.

Network Rail was at work over the Christmas and New Year break, cleaning up the railway. In particular, Birmingham city centre has focused efforts to remove illegal and unsightly graffiti. A team worked through the holiday period to clean known locations. This is part of a 700,000 pound (775,000 euros) effort by Network Rail and West Midlands Rail Executive, which has been underway for a year. The areas included Curzon Street, near the HS2 works on the new high-speed rail terminal for the city.

“Graffiti can give the impression of an uncared-for environment as well as making people feel unsafe”, said Network Rail in a statement. “This vital clean-up aims to make the railway and surrounding areas more appealing and welcoming. It also aims to make the rail network look its best ahead of the 2022 Commonwealth Games [which are to be held in the city this summer].”

Freight operators are only too well aware of the habitual targeting of their rolling stock. The comparatively isolated freight facilities make them more prone than busy passenger terminals. “The railway is a regular target for graffiti, but we are determined to tackle it”, said Allun Edge, maintenance protection coordinator at Network Rail.“Removing graffiti is an ongoing battle. People hate it as much as we do. Trespassing on the railway can also have fatal consequences. It’s simply not worth risking your life to spray a tag.”
Graffiti is not only an eyesore; it is a criminal offence, while trespassing on the railway is punishable by a fine of up to 1,000 pounds (1,100 euros).

Breaking into containers when a train is stopped in urban areas is a major problem in the USA. Recently in Los Angeles major clean-up after looters left packaging (including that for potentially hazardous clinical products) strewn over a triple track main line. Our particularly bad graffiti problem is on the rolling stock. Look at North American manifest (mixed carload) freight train videos on You Tube. With some trains up to 200 cars long, there’s plenty of graffiti to see!