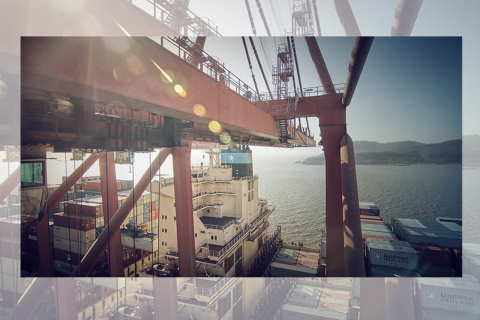 The lingering disruption to the global supply chain has proved a severe strain on business and industry around the world. However, not everyone has been affected in a bad way. Many shipping agents are reporting record profits and all those containers piled up on the quaysides need to be paid for.

The unprecedented cost of shipping, especially intermodal container costs, has seen trans-shipment quotes rise ten fold in a year, with typical intercontinental prices at ten times their pre-pandemic levels. Is rail freight one of the sectors profiting from the chaos. It is not quite as simple as that.

All those containers piling up in ports from Los Angeles to Rotterdam and Baltimore to Barcelona are being supplied by the major shipping lines of the world. That’s a money-spinner for the maritime industries. In 2020, Hapag-Lloyd, the Hamburg based international shipping and container transportation company reported earnings of 1.3 billion US dollars. In 2021, that figure was around 4.2 billion. In any currency, that’s a phenomenal rise.

Shippers stress that their costs have risen, though it is hard to reconcile their outgoings with the near ten-fold increase in container costs – which is proving one of the primary drivers in economic inflationary pressure. Still though, shippers are in the black while out on the wide blue sea. “Strong demand coupled with significant operational challenges such as bottlenecks, lack of capacity and equipment shortage in global supply chains drove freight rates up significantly”, said a statement from Maersk, commenting on their own performance in 2021.

Railways and shippers are not container storage

Onshore, a pile up of containers has to be paid for. Without negotiation, dwell time – renting ground space for your containers – can soon mount up. “At the same time, customers’ demand for truly integrated supply chains and simple, self-service solutions has never been more evident”, says Maersk comment. The shipper alludes to the advantages for their end of the industry. “This provides momentum, especially for logistics and digital solutions”, they say.

Demurrage, the fee for not collecting your cargo in a timely manner from your carrier, can be a nasty shock – or an unexpected revenue stream. According to industry sources, the seven American ‘Class One’ freight railroads collected over one billion dollars from that source in the first three quarters of 2021. However, railroads are less about storing stuff and more about moving it, and they would much rather be engaged in their primary activity.

Getting goods moving is still by far the most profitable activity for freight operators. The steep rise in ocean-going transport has had a direct benefit for rail. Traffic on the New Silk Road continues to benefit, as recent figures have confirmed. The need to move large volumes of containers away from the quayside has also been a boon for rail operators. In the UK, there have been some new flows from second tier ports, but the headline news has been from the bigger terminals. Only this month, Felixstowe had good news with a record thirty-eighth daily freight train service inaugurated at the east of England port.

The supply chain disruption around the world may persist for some time to come. There are other factors to consider – such as the severe flooding which hit the west coast of America and knocked out rail lines connecting Vancouver – a port critical for both Canadian and US trade with Asia. Incidents like that are bad news for shippers too. Vessels waiting at anchor are no more profitable than trains in sidings. Railways (and railroads) are a big help in moving backlogs in a hurry, but if the ships cannot discharge, then those bumper profits may be sunk in a post-pandemic slump.