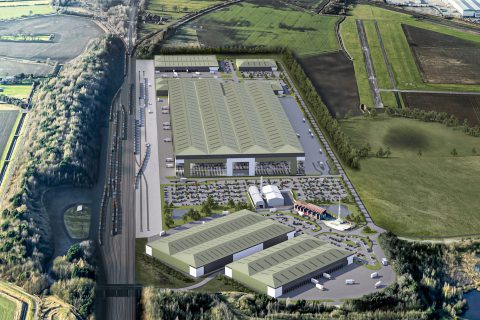 Rail freight development back on the agenda in Yorkshire

A former industrial site, which planning authorities have previously rejected for development, is back in the market as a potential rail freight terminal. Gascoigne Wood, the site of a former open cast coal mine,  is being advertised by developers as a rail-connected distribution and manufacturing park deep in the heart of Yorkshire and Humberside.

Extensive development in the area around the town of Selby in Yorkshire, which would have encroached on greenfield sites in the neighbourhood, was rejected by planners in 2020. Land development company Harworth has restarted plans to develop the existing brownfield site for commercial use, including rail facilities.

Gascoigne Wood is a 185-acre (75 hectares) former coal concentration and distribution site within the semi-rural neighbourhood of Sherburn-in-Elmet, in North Yorkshire. The site is now being promoted as Gascoigne Interchange Freight Terminal, and Harworth, the property development company with a long-standing interest in the site, has begun promoting it as a future logistics and manufacturing hub with extensive rail freight potential. “The proposals at Gascoigne Wood seek to capitalise on the unique rail connectivity and the site has the ability to attract major inward investment and deliver supply to meet the projected demand arising from rail freight growth in the UK”, said Chris Davidson of Harworth.

The viability of the site has been enhanced recently. Network Rail began using part of the site as a logistics hub to support the Transpennine Route Upgrade Project. The changing attitude towards several factors – including rail freight, climate change and unprecedented demand for warehousing, has given Harworth confidence in their plans for up to 2 million square feet (186,000 square metres) of rail-linked industrial and logistics space.

The former colliery site’s existing rail connection has facility for accommodating trains up to 775m in length – the industry standard maximum in the UK – and is located on a core part of the freight network, with W12 gauge available via the East Coast Main Line to the major deep sea ports. As Harworth’s own publicity shots show, the site has been used for storage and stabling of passenger stock – notably the superseded train sets from the East Coast Main Line, which were replaced by the Hitachi-built Intercity Express train sets, examples of which experienced difficulties shortly after introduction.

The  site at Gascoigne Wood is adjacent to the line connecting Leeds and Hull. There are direct connection to the Sheffield – York line and a south facing spur to the East Coast Main Line. Ironically, the ECML is close to the former coal facility because of a diversion, laid in 1983, to avoid extensive coal mining operations planned for the area.