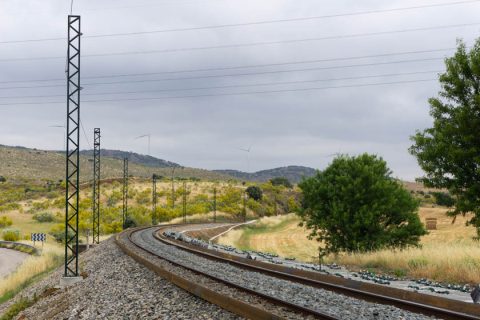 Spanish railway manager Adif has awarded a contract for an improved version of a variable gauge axle system for freight rolling stock to TRIA Transport Engineering and Technology. The project costs nearly 6 million euros and has a completion period of 24 months.

The contract awarded includes R&D activities, and the manufacture, supply, and testing of two more evolved versions of the current variable gauge axle system. Because much of the Spanish railway network has a different gauge than the rest of Europe, a solution is necessary for cross-border trains.

The system solves the problem of the existence of networks with different track gauges. A freight wagon equipped with this movable rolling axle can travel between the various borders with different track gauges. The axle automatically changes the gauge, thus eliminating load breakage points. This will shorten the journey times of goods and reduce the cost of interchanging axles, different gauges or transferring loads between wagons.

The contract includes the manufacture, supply and testing of the new axles for a large wheel (920 mm diameter) and a small wheel (760 mm diameter).

The axles will be installed on Adif freight wagons for commercial, operational validation tests and maintenance until the end of the test period (30 June 2023). The tests will be carried out on wagons for Adif’s own operations and on snowploughs, ballast hoppers, and rail monitoring platforms. With the tests, the solutions can be developed for a commercial version.

Increasing the competitiveness of freight transport

The project of the automatic variable gauge system for rail freight transport is an initiative from Adif to boost the competitiveness of rail freight transport, which is weighed down by the technical barrier posed by the gauge difference between the Spanish rail network (Iberian gauge) and the rest of Europe (standard gauge). This challenge is technically solved in passenger transport, given that, in this case, the rolling stock supports lower loads.

This technical difficulty, together with other circumstances such as elevation changes in the terrain, means that the modal share of rail freight transport in Spain is far below that of neighbouring countries. At present, it barely reaches 2 per cent in net tonnes and 4,5 per cent in tonne-kilometres.

The development of the variable gauge axle system has its precedent in the contract awarded by Adif in 2015 to the joint venture formed by Azvi and TRIA, which included the manufacture of ten axles of two types, five for 920 mm wheels and five for 760 mm diameter wheels. Called OGI, the system was developed as a joint venture with ADIF. It also included constructing and installing a gauge changer with this technology at Adif’s maintenance base in La Gineta, Albacete.

The variable gauge axle for freight rolling stock, developed in the previous contract, has been authorised for entry into service by the State Railway Safety Agency (AESF), which allows its commercial use in certain types of wagons used in the tests.

The new contract is part of the aid granted by the Ministry of Science and Innovation. Adif has the power to grant sub-licences to make the technology available to axle manufacturers to incorporate it into freight rolling stock.