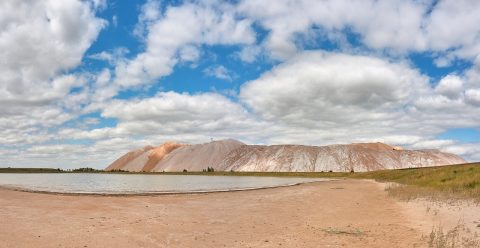 Lithuania fumbles with transport Belarusian fertilisers after US sanctions

The new US sanctions on Belarus have led to fierce discussions about the rail transport of Belarusian potash fertilisers, which has until now continued after 8 December, when the sanctions went into effect. The sanctions are believed to encompass Belaruskali, one of the world’s largest potash fertiliser producers and exporters. However, there is enough room for interpretation to make this rail freight consignment up for debate.

Belaruskali fertilisers account for around four fifths of all rail freight in Lithuania. LTG Cargo carried around 53 million tonnes of cargo last year and received 397 million euros in revenue. In the first six months of this year, it has carried 24 million tonnes and received 177 million euros. It is therefore not an easy task to eliminate this cargo from the railways. Over the past few days, discussion has been going around on who is responsible for this task, if at all.

In Lithuania there is word of a scandal as the shipments have been permitted to take place. Two Lithuanian ministers, transport minister Marius Skuodis and foreign minister Gabrielius Landsbergis – the latter has been vociferously urging the EU and the US to slap the authoritarian Belarusian regime with harsh sanctions – kept their portfolios, but the scandal will likely ‘haunt’ them, analysts say.

Prime Minister Ingrida Simonyte did not accept their resignation, explaining that it in a ‘tense’ geopolitical situation and amid the migrant crisis on the Lithuanian-Belarusian border and the Covid-19 crisis would serve the interests of Minsk and the Kremlin.

Dainius Kepenis, an opposition MP, told RailFreight.com that he is ‘stunned’ about the reversal on Belaruskali. “What a switcheroo! Unexplainable so far. The guys in our cabinet are so deeply in mess that they barely know what they are doing”, the Lithuanian parliamentarian said.

“Seriously, sanctions against Belarus, coupled with Lithuania’s hawkish stance on China (Lithuania allowed Taiwan to open Taiwanese Representative Office in the autumn, angering China, which is retaliating now.) are about to make our economy bleed – our entire sectors start suffering. Everyone sees clearly that sanctions (on Belarus) not just did not oust the Belarusian strongman, but made Belarus and Russia particularly close and strong in unity”, Kepenis said.

Lietuvos Gelezinkeliai (Lithuanian Railways, LTG), Lithuania’s state railways company, announced on 21 December that it had received an official confirmation from the US Treasury Department’s Office of Foreign Assets Control (OFAC) that Washington’s sanctions against Belaruskali are ‘not binding’ on LTG.

The Lithuanian company quoted OFAC as saying in its letter that the sanctions “do not appear to be directly binding on LTG as there is no link to the US” or US entities, including US financial institutions or correspondents.
Experts say the US sanctions are not a sufficient legal basis to terminate the contract with Belaruskali and LTG would risk being sued by the other side for non-performance of the contract. However, Mantas Dubauskas, the railway operator’s spokesman, says that this does not change the situation and the company continues to seek a solution on how to legally terminate its contract with Belaruskali.

One of the reasons that the Belaruskali product shipments via Lithuania did not stop after the early-December US sanctions came into force, is because the Belarusian company had made an advance payment to LTG, sufficient to cover the cost of rail services for several months.

Gabriele Vasiliauskaite, the transport minister’s advisor, told RailFreight.com that Belaruskali’s pre-payments were received according to the amendments to the contract between LTG Cargo (Lithuanian Railways) and Belaruskali.
“The circumstances of the advance payments will be reviewed. The minister of Transport was informed only about the fact of received pre-payments. The transportation of Belarusian fertilisers through Lithuania is a national security concern. Therefore, the minister has appealed to the National Security Commission for an in-depth evaluation of further execution of this contract”, she emphasised.

The Lithuanian government also said it was ‘seeking ways’ to terminate the state railway company’s contract with Belaruskali. Meanwhile, Seimas, the country’s parliament, scrambles to come up with legislation banning any transit of Belarusian goods, including Belaruskali fertilisers, due to threats to national security. The draft bill sits in the parliamentary committees now and the MP’s voting is expected early next year.

Eligijus Masiulis, Lithuania’s ex-transport minister, told RailFreight.com that he is ‘convinced’ that the entire cabinet and the two ministers ‘knew well’ about the issue of Belarusian potash freight. “It was definitely not an ordinary question on their issue…The whole scandal is owing to the little political experience (of the government) and poor communication…Acknowledging the importance of Belarusian fertilisers (for Lithuanian economy), the ministers had to honestly say that, although they support US sanctions, they will not implement them at once – not for the deadline of 8 December”, he said.

Apart from the legal discussion, there is emphasis on the impact that termination of the contract would have, on many different parties. The head of LTG, Mantas Bartuska, has indicated that LTG may need around 49 million euros in subsidies annually to compensate for the loss of fertiliser shipments by sanctioned Belaruskali.

Another (anonymous) source aware of the situation told RailFreight.com: “The EU thinks that, with the ban (on Belaruskali) in place, vast poor regions, especially in Africa and some Asian countries, depending on Belarusian fertilisers in their agriculture heavily will suffer. Also, Brussels is anxious that a disruption or a ban on the fertilisers can jack up food prices globally.”

According to Irina Savchenko, spokeswoman for Belaruskaya Kaliynaya Kompaniya (Belarusian Potash Company, BKK) which is a subsidiary of the state-owned fertiliser giant Belaruskali, Minsk will also retaliate by halting the transit of goods to Lithuania. “If Lithuania breaks its international agreements, we will use all legal remedies available and take legal action in courts,” Savchenko told LRT radio on 21 December.

Savchenko said she expects that the transit corridor for Belarusian fertilisers through the Lithuanian seaport of Klaipeda will remain in place after 1 April, which now appears as the Lithuanian government’s new deadline to get Belaruskali freight off the country’s railways and the port. But at what price?