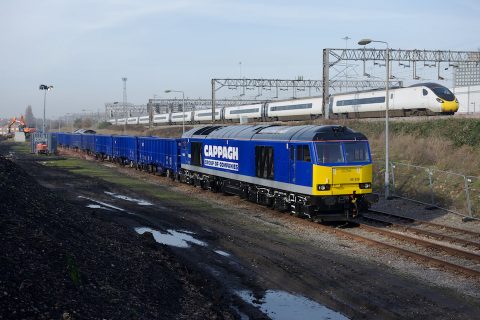 The UK’s most famous rail enthousiast, Francis Bourgeois, a titan of TikTok and Instagram, has been spotted influencing online fans from the cab of a freight locomotive. The ever-smiling social media star has been promoting rail freight alongside a deal with an online retailer, which involved a video shoot with a UK logistics operator. Needless to say, the Cappagh Group were fully onboard with the opportunity to promote rail freight to Francis’s over one million followers.

Cappagh Group, an operation always willing to get on the line, collaborated with the online sensation and celebrity train spotter Francis Bourgeois to make the most of an image-enhancing opportunity. It has gained them national media coverage to an audience not known for appreciating the benefits of rail freight, even though much of their closet collection probably completed the greater part of its journey on the rails as part of an intermodal consignment.

Not a first appearance for rail freight

Donning high-visibility gear for safety and a wardrobe of outfits for online retailer ASOS, the celebrity blogger, trainspotter and engineering student Francis Bourgeois has made the most unusual use of freight locomotive as a changing room for a fashion shoot. Nipping in and out of the cab of a Class 60 diesel unit from DCRail – the rail freight arm of Cappagh Group – Francis is kitted out in a series of menswear combinations, carrying the assignment off with all the aplomb of a 1970s catalogue model.

While retailers like Freemans and Kays – bastions of the catalogue era of armchair retail – may be more familiar to his parents, the use of rail freight in a supporting role is nothing new to Francis or previous generations. Many more longer-toothed readers will remember the venerable class 37, dressed up as a police patrol “loco”, flagging down a speeding HST (High-Speed Train) in a 1980s promotion for high-speed passenger services.

Happy to help, but not so fashion conscious

“This Black Friday collaboration is brilliant”, said Digital PR Creative Nathan Bickerton at Rise at Seven agency, commenting on the pre-Christmas marketing campaign. He did, however, offer a line of tongue in cheek analysis. “I can’t help think that ASOS missed a trick by not releasing a Francis inspired TRAINing wear collection”, he noted.

David Fletcher, Director Rail at Cappagh Group, said that while he rarely troubled the internet fashion houses with his wardrobe requirements, it was good to see rail freight operations being shown to a new younger audience. “Cappagh and DC Rail were very pleased to help”, he said, adding that his own choice of retro-style outerwear was rejected for the shoot. “He didn’t want my parka”, said Fletcher jokingly, who reputedly still has a copy of the 1991 Littlewoods Winter Collection catalogue in his desk bottom drawer.

what if you get stock for wholesale clothing from UK check out !