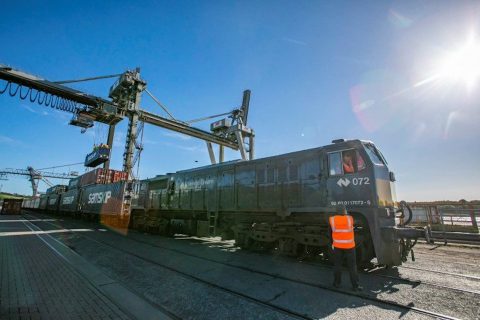 A freight strategy has been published by Iarnród Éireann, the operator of the national railway network of Ireland – also known in English as Irish Rail. The document, Rail Freight 2040 Strategy, sets out the Dublin government’s plans for an ambitious four hundred per cent increase in operations, raising traffic to over one hundred new flows weekly. The aim is also to radically reduce the carbon footprint of rail freight service, with the existing diesel fleet replaced by new low carbon motive power.

Ireland’s rail freight operations will be at the start of two decades of boom times if the targets set out in the new strategy are to be met. A five-fold increase in the number of services running on the Irish network would represent a radical modal shift – far more than set out in the recent British ambitions, but admittedly from a lower base load. The strategy outlines 500 million euros of spending and around 25 specific projects. The plans have been broadly welcomed with some reservations, mainly around infrastructure development in the west of Ireland and clarity over collaboration with the moribund rail freight industry in the UK territory of Northern Ireland.

Hard on the tail lights of a suite of documents from the UK and the European mainland, the Irish government’s appointed integrated rail operator, Iarnród Éireann, has brought forward far-reaching plans to overhaul its freight operations. “Our Rail Freight 2040 Strategy as an ambitious vision positioning rail at the centre of Ireland’s freight transport system”, said Jim Meade, the CEO. “It recognises the sustainable benefits that rail provides and invites all stakeholders to work collaboratively on its’ implementation over the coming years as a contribution towards achieving Ireland’s climate objectives and wider strategic national outcomes.” 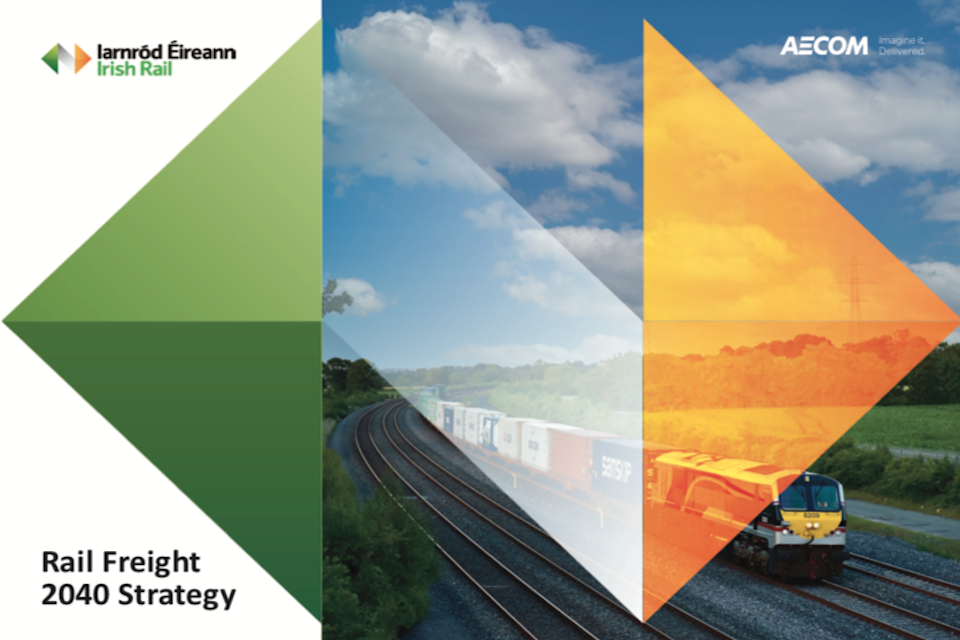 Set out in the strategy, Iarnród Éireann is committed to improving freight services and increasing the role of rail to support the logistics and supply chain industries. “As is the case in other countries, the development of a sustainable rail freight offer requires collaboration across all stakeholder groups, particularly those setting policy, providing investment funding, transport users, logistics providers, ports and local authorities”, says Meade. “Implementation will provide many opportunities for all stakeholders to work in innovative and collaborative ways towards building Ireland’s future sustainable freight transport system.”

Modal shift but no western corridor

The low baseline for Irish rail freight is addressed in the report. “Ireland lags significantly behind that of other European countries”, it says. “A lack of supporting policies has hindered the sector’s growth and led to a drastic decline in the volume of goods and materials transported by rail over the last two decades. While investment in new infrastructure and rolling stock is needed to increase rail freight services in line with European norms, there are also some policy initiatives required to establish a more favourable environment for rail freight and put in place the supports necessary to realise the potential for the sector in Ireland.”

In a key element of the strategy, freight terminal development is highlighted to provide an attractive network of facilities to encourage a modal shift to rail. Fittingly, the Strategy was launched at Ballina in the northwest of Ireland – commonly referred to as the nation’s rail freight capital. “This investment will provide an expansive network of inland rail freight terminals establishing rail freight in each of the regions and providing strong national coverage”, says the report. However, critics point to the apparent omission of completing a freight corridor down the west coast, relieving other parts of the network and stimulating ecumenic growth in the overlooked Atlantic provinces.

Port traffic accounts for more than ninety per cent of annual Irish trade, says the report. “The importance of port freight traffic underlines the need for modern and effective freight infrastructure to facilitate the movement of goods and materials”, it adds. “Central to Rail Freight 2040 are initiatives to connect all Tier 1 Ports to the rail network (Dublin, Cork and Shannon). “This degree of connectivity will establish an expansive freight network which provides the options and resilience required by modern supply chains and potential customers.”

Iarnród Éireann says that Irish intermodal traffic is characterised by shorter journeys than elsewhere in Europe but points to successful short-haul operations in the UK as an exemplar of how the sector can succeed in Ireland. “There is strong demand for additional inland intermodal terminals in many countries, including the UK. The Teesport to Doncaster example shows that it is feasible to run container trains efficiently over shorter distances where the services are provided efficiently”, says the Report.

Servicing this ambitious expansion of rail freight services will require a new fleet, notes the operator. A large proportion of the existing rolling stock is near the end of operational life, and the ubiquitous 071 diesel power units are already into overtime. High levels of maintenance burden the operations. Although less clear about specifics, the report calls for significant Investment in new wagon fleets and locomotives. UK and European manufacturers will be eager to engage, but the Irish government has thrown its procurement net over a global stage in the past.

To ensure a lasting and sustainable economic boost, the investment in new rolling stock and motive power would be sequenced over the length of the plan. Ireland is still keenly aware of the pitfalls of boom and bust, as the Celtic Tiger economic collapse is still fresh in the national memory. “These wagons will reduce the impacts on track infrastructure, be capable of higher speeds and have better braking capability to facilitate longer trains”, says the Report. “These new units would also be flexible to cater for 45-foot boxes, temperature-controlled units and support track and trace systems. Investing in new bulk wagons will be made as part of a collaborative approach with new and existing customers to secure rail traffic.”

In the late 1990s, the Dublin government invested heavily in a national motorway network. That project has undermined the viability of rail freight for two decades, say, critics, who see this new strategy as a means of redressing the balance. It is certainly not before time. The climate, so to speak, has changed significantly for road transport – even though trucks have a stranglehold on the logistics sector of the economy.

If that is to change, the freight strategy must be backed by something radical upfront. That is precisely what is proposed, with a new motive power fleet. “New locomotives will also be required to replace the ageing 071 diesel fleet, which will be life-expired by 2030. New locomotives will be electric bi-mode freight dedicated locomotives, which will enhance the green credentials of rail freight and assist in further reducing operating and maintenance costs.” Battery-electric anyone? Given the Irish government’s close association with the other side of the Atlantic, it may be no coincidence that the Strategy was published in the same week as Wabtec unveiled their battery electric freight solution to an eager American audience.