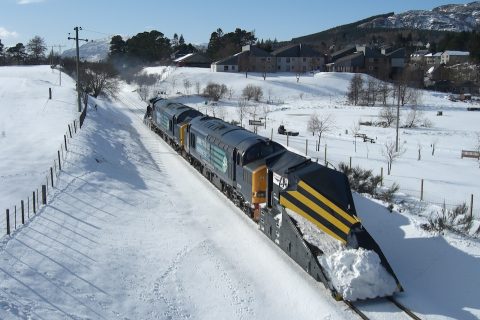 Black Friday became White Out Saturday, as bargain hunting Britain was battered by Storm Arwen on Friday and Saturday. The railways did not escape the disruption. The country’s east took the worst of the weather, with the East Coast Main Line shut between Newcastle and Edinburgh and the West Coast Main Line closed between Carlisle and Glasgow. Many lines in the north of England were also closed or disrupted, and all services in Scotland were halted overnight on Friday and through Saturday. Some passenger operators continued to cancel all services into Sunday too.

Storm Arwen, the first named storm of the winter, forced much of the railway network into deep freeze over the weekend. Widespread snow, even as far south as Worcester, left freight operators struggling and many passengers forced to spend many hours stranded on board. The big problem this time was the wind. Fearsome gales brought down trees and littered the network with debris. Several trains were hit by obstructions, particularly in Scotland, where a Borders Railway service was severely damaged, prompting the cancellation of all ScotRail services.

Network Rail, the infrastructure agency for the UK, has been working overtime to try and restore operations. “High winds impact the running of the railway as they can cause overhead line equipment to sway and get tangled on train equipment, causing damage and delays”, said a statement that failed to conjure up the severity of the weekend storm. “Strong winds can also blow debris and trees onto the railway, which then has to be moved by teams from Network Rail.”

Addressing Storm Arwen directly, Sarah Reid, Route Director for Network Rail’s East Coast, the area worst affected, said severe weather such as this does cause problems for the railway. “We are doing all we can to keep services moving where possible, and it is safe to do so”, she said, speaking on Friday night. “We are expecting major service changes into the weekend, particularly with the closure of the East Coast Main Line in and out of Scotland from 17:00 [on Friday].”

Both the rail routes crossing the border between Scotland and England were closed on Friday. The disruption, however, was not confined to the rails, with hundreds of trucks stuck in adverse weather conditions on the roads, and the A1 road that hugs the east coast closed entirely. Inland, despite police warnings not to travel, several vehicles were blown over.

The implications for intermodal traffic were widespread. It is not out of the ordinary for the line between Stirling, Perth, and Inverness to be affected by heavy snow, but the speed of the storm onset was a challenge. There were, therefore, concerns for the traffic along the Highland Main Line, which delivers daily supplies to Inverness and the north of Scotland.

The weather forecast for the UK remains cold throughout this week, with sub-zero temperatures on most days. Storm Arwen has passed and, despite a backlog of repairs, the network is fully restored to operations. Until the next time.