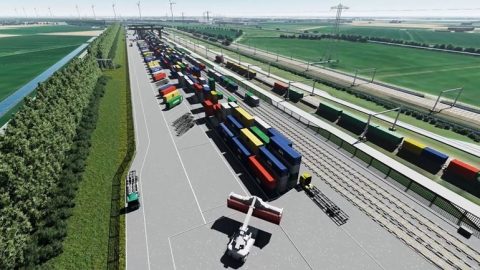 Residents in the Netherlands object to new rail terminal Gelderland

In the Netherlands, local residents have made another attempt to stop the construction of Rail Terminal Gelderland. On Thursday, they asked the Council of State to suspend the provincial integration plan and all associated permits.

This summer, the Provincial Council of the Province of Gelderland opted for Valburg as the location of the new terminal. With the realization of this terminal, companies in Gelderland/East Netherlands can further transport their goods from the road on the Betuweroute. It has been a long-held wish from the industry, although it has been met with opposition from local residents .

Only in the course of next year will the Council deal with all objections in detail in what is known as the procedure on the merits. The chairman of the board announced that independent experts would also be called in for advice.

According to the residents, the plans should be suspended or else, an irreversible situation will arise. The province of Gelderland wants to start the preparatory work as soon as possible, even though the integration plan and the permits have not yet been definitively approved.

‘Rail terminal is of international importance’

According to the lawyer of the province, the rail terminal is of great national and even international importance. “The preparatory work must now begin. If that is not possible, the entire project will be postponed for a year.” She pointed out to the Council an expected delay damage of more than one million euros. In addition, a number of employees will be out of work for a year.

One of the local residents was not impressed. “The province creates its own haste. The tendering and awarding still has to be done. I see no reason why the preparatory work should start now.” According to him, the province is acting as if it is a matter of time. “But the province has already postponed the project three times.”

The Council must now decide whether to suspend the integration plan and permits, so that the preparatory work is blocked. This is mainly a balancing of interests. The balance then quickly tilts in favor of the province.

In addition, the objectors who ask for suspension did not really come up with urgent reasons. They mainly complained to the Council about the attitude of the province, which would promise all kinds of things, but did not lay this down in agreements. They also complained about the unequal struggle that citizens have to wage against governments. They cannot afford to have expensive counter-reports made.

The lawyer for the province pointed to mainly ecological reasons for starting quickly. The habitat of bats, owls, hares and rabbits should not be disturbed at certain times of the year. In addition, soil investigations must be started quickly. There is a good chance that explosives will be found and they must first be removed.

The Council will make a decision within two weeks.

This article was originally written by Adrie van der Wel