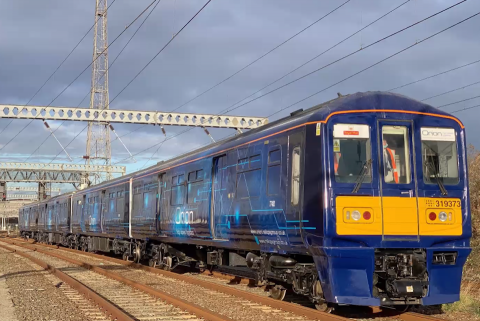 Orion High Speed Logistics, the parcels and light loads division of Rail Operations Group, has confirmed departure this morning of their much anticipated high-speed service, bringing mass-market parcels traffic back to the British railway scene. A morning departure from Glasgow, and a return service from London confirms widespread anticipation of an Anglo-Scottish service start-up this week. The operator is expected to be the first of a constellation of entrants to the sector

The departure from a Royal Mail facility in Glasgow this morning confirmed speculation that of all the players aiming to launch light logistics services, Orion would be first to let wagons roll. As RailFreight.com reported earlier today, the industry was expecting a move as early as Thursday, but Orion has taken the lead, and launched today.

For now, RailFreight.com understands that their repurposed passenger electric multiple unit trains will be locomotive hauled, for operational reasons. Nonetheless, the move is seen by many as a breakthrough for the rail freight sector and expected to be the beginning of a whole constellation of light-logistics operations back on the UK network.

Is this the night mail, crossing the border

In a modern-day operation, evoking WH Auden’s famous Night Mail a train pulled out of the Royal Mail facility at Shieldmuir in Glasgow, before the cool dawn of a Scottish winter’s day. Heading south into the slowly brightening skies, the 0534 departure was indeed ready to tackle the gradients of Beattock and Shap, on an express run to Princess Royal Distribution Centre in the north London suburb of Brent.

Today’s inauguration has been a source of much jubilations for Orion. The fact that the repurposed former passenger electric multiple units were hauled out of Shieldnuir by a locomotive only serves to emphasise the eagerness of Orion to get their service to market. It’s anticipated that the loco haul option, for what is currently an eight-car formation will be a temporary measure.

Speculation was rife last week that Orion would be first out of the blocks, and sprint away with a collaboration with Royal Mail. That proved correct, albeit most observers expected a northbound service to be the first departure. As it stands today, the diagram called for an early morning working from Glasgow, with the return service leaving London this afternoon.

Orion has been making no secret of their intent. They have widely demonstrated the repurposed trains – former passenger EMUs designated class 319 – to the industry at large. The most high-profile such exposure of the dual-voltage units was at a recent visit to Euston Station in London. The demonstration there was to show the interoperability of the units, directly into passenger terminals.

The resumption of parcels and light-logistics traffic into passenger terminals is on the agenda from the outset for some other operators, eager to enter the market. Most notable among them has been Varamis Rail, a start up based in Doncaster, who have high hopes of inaugurating services on both the East and west Coast Main Lines early next year.

Light logistics was largely surrendered to the road haulage industry almost two decades ago. The legacy of the publicly owned British Rail – the familiar Red Star parcels operation – was eventually swallowed up by a private sector enterprise and moved operations to the highways. Niche operators such as InterCity RailFreight have carved out profitable markets, but Orion’s move today represents a first full-scale assault on the light logistics market since the early years of the century.

Keep pace and carry on

With the first train approaching London, it has been an understandably hectic time getting the service on the rails and delivering. Railfreight.com understands the initial operation will be Tuesday to Saturday, in the run up until Christmas which will help Royal Mail with their seasonal volume.

The 0534 departure from Glasgow, and the return working at 1453 from London, will see their trains pitched right into the busiest parts of the working day for the railway. It is the ability of the dual-voltage units to keep up pace with passenger traffic that has prompted the project – albeit with locomotive haulage at present.

So the train will take the strain!,,
When it arrives in London all the freight will be offloaded to road vehicles to deliver the goods to the customers premises. We all know in the Road haulage industry that railway’s are totally strangled by the unions. This is a futile attempt to get goods transported by rail .Like the other White Elephant HS2 a gross waste of taxpayers hard earned money. Container traffic is the same , all the goods are delivered by road . TRUCKS DELIVER TRAINS DON’T

What an excellent plan! Railways are perfectly suited for long haul runs to distribution centres where vans or lorries can deliver locally. Major roads will have reduced traffic and this has to be a more efficient method of distribution.

Well John Darraugh, thanks for your vote of confidence. Pity that you’re backing the wrong horse here. I don’t want your dirty smelly lorries destroying the atmosphere and ruining the countryside, nor do we need any more motorways and environmental destruction they cause.

Shieldmuir is a part of Motherwell in South Lanarkshire, not Glasgow.
Train headcode 3Q41.

I despair when I read contributions on bulletin boards from navel gazing naysayers. What a wonderful article to know that some are forward thinking and acting out what most in the western world know to be the future even if it was part of the past.

I despair when I read some of the comments by contributors that want to live in the past. I’d rather be associated with those that want to go forward. To move traffic especially lorries from our overloaded motorways must be a good way to move forward especially when the nett result is a lowering of our carbon emissions. With HS2 spare capacity on the railways will permit more rail freight.

Not before time,fast freight over a distance is the answer to a lot of our road problems,good on Orion.

Parcels by electric train has to be the way forward and then use electric vehicles to distribute.