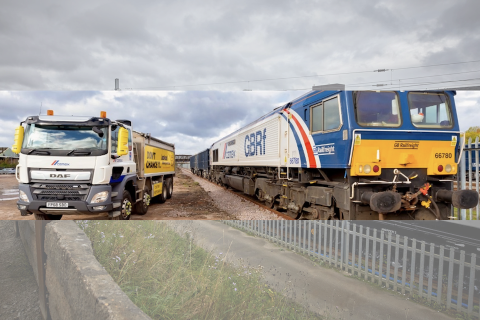 The global construction materials company, CEMEX, has increased its use of sustainable transport methods. We can take that to mean the official opening of their new rail depot in the heart of Birmingham, in England’s West Midlands. The business and customers will be able to use rail for long-haul aggregates and building materials as the construction sector ramps up in line with the huge high-speed rail project in the city centre’s Digbeth neighbourhood.

Birmingham has some of the UK’s most congested roads and bottlenecks, so commerce and communities have welcomed the news of new rail opportunities to move heavy goods around the city. CEMEX say its new rail depot in Birmingham will allow the business to increase its use of trains to transport its products and reduce truck movements. The move is also in line with CEMEX’s efforts to enhance the sustainability of its operation as part of its ‘Future in Action – Committed to Net Zero CO2’ strategy.

Following a significant investment and the completion of major infrastructure works at Small Heath, the new depot for CEMEX has welcomed its first train. Over the weekend, final preparations were being made to start receiving regular aggregates shipments from CEMEX’s Dove Holes Quarry in the High Peak district of Derbyshire, near the market town of Buxton. The quarry is one of a group of facilities all served by rail in the area. Cemex says the deliveries to Small Heath will be transported out to construction projects around Birmingham.

With the regional economy benefitting from the construction work around HS2, Dave Hart, the Cemex Supply Chain Director for the UK and France, recognised the importance of the new terminal. “As the UK’s second-largest city, Birmingham plays an important role in our strategy to focus on metro markets”, he said. “The opening of this depot will allow us to increase volume and service provision. We are anticipating four trains per week will pass through this depot.”

That figure of four trains potential takes over 10,000 tonnes off the UK roads – something like 200 heavy truck movements eliminated. “The opening of the Small Heath rail depot will not just allow us to grow our business further”, added Hart. “It also offers considerable sustainability benefits as it will enable us to maximise the use of rail as a more efficient means of transport for our products. Potentially, this depot could mean 17,000 fewer trucks on the road each year, with an approximate annual CO2 saving of 2,200 tonnes.”

CEMEX has partnered with GB Railfreight, Network Rail and aggregates distributor GRS to operate the Small Heath depot. With reference to the COP26 in Glasgow, Liam Day, Commercial Director of GB Railfreight, said CEMEX’s investment in its new depot demonstrates the key role rail freight is playing in reducing the impact of carbon emissions. “This increase in capacity will enable us to operate more trains into Small Heath and will remove congestion from some of Birmingham’s busiest roads.”

Infrastructure improvements have been undertaken by the national agency Network rail. David Young, their Business Development Manager for Freight, claimed Network Rail’s investment was pivotal. “In supporting the delivery of CEMEX’s new rail aggregate depot at Small Heath. We are proud to have worked to enable rail freight growth in this important sector, encourage modal shift from road to rail and support decarbonisation targets”, he said.

Martin Reid, Director of GRS Rail Services, the aggregates broker on-site, said his company was delighted to be working with CEMEX to help to supply Birmingham’s construction industry with redevelopment materials. “The new facilities at Small Health support the use of rail freight to bring construction aggregates close to where they’re needed in the city whilst generating a fraction of the emissions of the equivalent road journeys”, he said.

CEMEX say its use of trains to move its building materials is growing year on year, with efforts being made by the business to switch from road freight to rail and sea. In 2020, the increased use of rail transport saved 150,000 road movements and 17.5 kilotonnes of CO2 from being released into the air, according to their own figures.