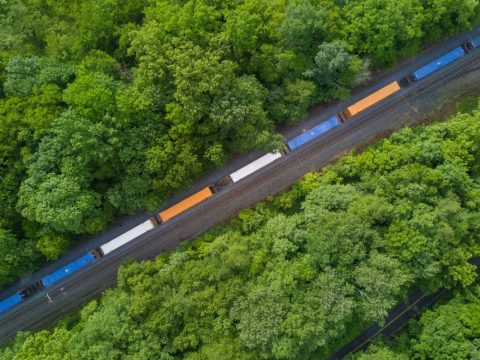 Calculate your CO2 emissions on the New Silk Road

Following the The COP 26 UN Climate Change Conference in Glasgow, individual players along the New Silk Road are presenting various initiatives to decarbonise transport and move more goods onto the rails. Among them is UTLC ERA, which has developed a CO2 calculator for rail shipments on the New Silk Road.

According to the CO2 counter, 34,300 tons of CO2 were emitted during the transport of 513,700 TEUs from China to Europe in the first nine months of 2021. This was calculated for the route via Russia, Kazakhstan and Belarus.

With a share of approximately 20 per cent of CO2 emissions, the traffic sector is the third largest cause of greenhouse gas emissions, after the energy sector and industry. However, rail is considered the least polluting, and therefore, efforts are made to encourage a major shift to rail.

The good news is that something has changed over the last few years. Where rail freight accounted for 1 per cent of Eurasian traffic in 2015, this is now 5 per cent. This is still small, but the share continues to rise.

UTLC ERA has launched several projects to support this shift to rail.
Among other things, it is contributing to the introduction of a uniform EEU procedure for the transit of goods. This also means that digital waybills will be used on the entire China-Europe-China route.

Apart from saving a lot of paperwork, the accompanying document will state a capitalised sustainability value and provide detailed information on the amount of CO2 emissions saved. In this way, the environmental benefits become clear right away.

UTLC ERA is also part of the new environmental initiative “Keen on Green”. Among other things, this initiative focuses on the protection of highly endangered animal species in nature reserves along the New Silk Road. For example, the company supports the WWF project to reintroduce the Bactrian deer in Kazakhstan, which is currently on the Red List.

“The ecological added value in rail freight transport is developing into a new philosophy for building a sustainable transport sector on our continent. The climate-friendly rails could justifiably symbolise the UN Climate Change Conference in Glasgow, as moving more and more goods to the rails is a decisive condition for achieving the European Green Deal and for accelerating the decarbonisation of the Eurasian logistics,” emphasises Alexey Grom, CEO of UTLC ERA.

Alexey Grom is also one of the guests in today’s RailFreight Live. He will speak about the new Kaliningrad terminal, and the challenge of congestion in the enclave.

RailFreight Live is our weekly broadcast. You can watch the show live at 1 p.m CEST on our YouTube Channel and subscribe to stay updated on the latest news of the rail freight industry. You can also watch the show on our LinkedIn page if you follow the page of RailFreight.com. The show of this week can also be seen below.