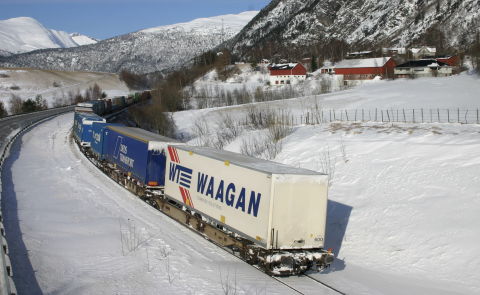 The fish shipping industry in Norway just acquired another transport option by rail. OnRail, a recently established rail freight operator, will run a frequent service between Fauske in Norway’s northern end and Oslo, the country’s capital.

The new train service will run along the Nordland railway line, the country’s longest route, starting from Bodø and reaching Trondheim. The route’s total length is 729 kilometres. From Trondheim, the train will continue to Oslo, travelling approximately 500 more kilometres.

The distance between Fauske and Oslo might be very long. However, deploying such long-distance freight trains is part of Norway’s strategy to turn more cargo from road to rail. The new service will become even more attractive since Bane NOR, Norway’s rail infrastructure manager, invests heavily in the specific route.

Specifically, it is building longer crossing tracks while implementing the ERTMS signalling system on the Nordland line. Most importantly, the infrastructure manager is currently building a new rail freight terminal in Fauske, the new service’s starting point, which will function as a gateway to the fish shippers of northern Norway. “This gives us the opening we need to offer fish exporters and other transporters an environmentally friendly alternative”, commented OnRail’s founder and general manager, Henning Aandal.

Bane NOR’s infrastructure investments are not the only ones facilitating the opening of the Fauske-Oslo route. The operator itself takes some steps forward to provide high-value services to its customers. The Norwegian company sealed an agreement with Stadler, a Swiss train manufacturing company, to construct and deliver two EuroDual locomotives.

The two EuroDuals will be at OnRail’s disposal by November 2022. “With these giant forces available, we can carry long and heavy freight trains at high speed,” stated OnRail.