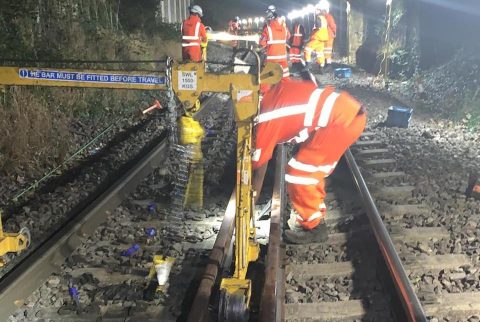 Network Rail has completed a planned renewal of over a mile of rail on the Felixstowe branch line, serving the container port there. Felixstowe, the UK’s busiest intermodal port, is already a key traffic generator for rail freight and has plans to grow traffic in the coming years. Network Rail say the renewals will improve reliability for passenger and freight trains.

Network Rail engineers completed the renewal works at weekends throughout July, August and September. The project involved replacing the rails between Westerfield and Derby Road in the town – a distance of around two kilometres.

Excess boxes piling up on the quayside

The Port of Felixstowe was in the news in the past week, as the disruption to the global supply chain persists. The port has a huge backlog of containers on the quayside, and distributors – marine, road and rail – are all working hard to clear the mountain of boxes.

Rail freight operators have welcomed the completion of the renewal works, which Network Rail says will avoid unplanned speed restrictions. The works are part of Network Rail’s regular maintenance programme to keep services running safely and reliably across the region.

Network Rail’s route director for Anglia, Ellie Burrows, said she thanked those disrupted by the works.“We have completed a programme of work on the busy Felixstowe line, which is essential to keep freight and passenger services running safely and on time.”

With rail freight demand growing, Network Rail is also working on increasing the rail network’s capacity serving Felixstowe. As well as additional capacity for passenger services, NR wants to provide three paths an hour for Felixstowe freight services. A second round of public consultation has been launched on proposed works around the town of Ely.  That consultation remains open until the end of November.

Whether Felixstowe’s excess boxes can be dispatched by the end of November remains to be seen, but at least the shiny new rails carrying them will be kept polished by all that traffic.

But I understand that the Rail to Felixstowe remains Single Tracked.
Odd that Grangemouth is double tracked and now electrified yet takes far less containers