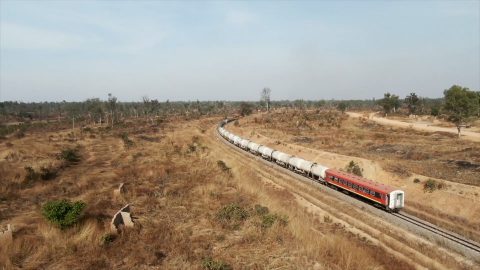 Angola links mining region to the world with Lobito Corridor

The Democratic Republic of Congo (DRC) and Zambia have 34 per cent of the world’s cobalt reserves and over 10 per cent of global copper reserves. Soon, these raw materials will find a shorter route to the world, through the Angolan port of Lobito. How? Through the Lobito Corridor.

The Benguela railway, a vital link of the Lobito Corridor, will soon be opened up to the private sector, with the operation and maintenance of the railway infrastructure and of rail freight transport set to be granted via the Lobito Corridor. Investors from various countries are eagerly awaiting the announcement from the Republic of Angola’s Ministry of Transport to come forward with proposals to boost the axis, which connects one of the most important mining areas on the planet with the shortest, safest and most economically viable connection to a seaport when compared to other transport corridors through southern Africa.

This concession has the fundamental regional objective of revitalising exports of copper and cobalt produced in the DRC and Zambia via the Port of Lobito. According to MineSpans-IHS Markit’s global mining market analysis models, 80 per cent of the minerals extracted from these two countries will be transported via the Lobito Corridor by 2030.

Its geographical positioning being its main asset, the Lobito Corridor is the shortest route between the Katanga mining region in the DRC, the Copperbelt in Zambia, and a deep-water seaport. Raw materials from the region are currently exported via the ports of Durban (South Africa) and/or Dar-Es-Salaam (Tanzania); routes up to four times longer than the route between the mining regions and the Port of Lobito.

A connection will be established between a pre-existing rail link with the DRC and a branch connecting the Municipality of Luacano (Moxico) and the Jimbe Border Post (Angola/Zambia border) at the earliest opportunity, therefore providing direct rail access to the Zambian Copperbelt, which is in the Southern Sub-Region of the African Continent.

This transportation of copper and cobalt are expected to have a high business impact level. The DRC, one of the countries that will benefit from the Lobito Corridor, has the largest cobalt reserves in the world (3.6 million metric tonnes). In fact, the country extracted 66 per cent of the global cobalt supply in 2020. Domestically, this volume represented an increase in production of around 10 per cent, as recently reported by the Congolese central bank.

Copper production, an industry in which the DRC is a continental leader, also increased by 12 per cent last year.
Copper production in Zambia also followed the trend, registering an increase of 13.6 per cent in 2020. The Zambian Ministry of Mines’ forecast predicts that over 900,000 tonnes will be extracted in 2021, a number well on its way to reaching the country’s long-term goal of producing over 1 million tonnes per year. Zambia, which is also rich in cobalt, is the second-largest copper producer in Africa after the DRC.

Attention from around the world

Since the presidential order was issued in September 2020, the Tender for the Lobito Corridor “Service Concession Contract for the Operation, Management and Maintenance of the Railway Infrastructure for the general transport of Ore, Liquid and Gas Cargo” has already attracted attention from companies around the world, especially those from China, the United States, Germany and other countries across Europe and the rest of the world.