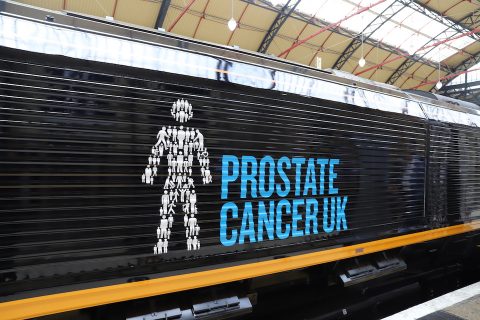 GBRf has unveiled a newly named Class 66 locomotive in order to raise awareness for prostate cancer. The UK-based rail freight operator has partnered up  with Prostate Cancer UK, GBRf’s chosen charity, and the League Managers Association (LMA), GBRf’s corporate partner for the charity drive. In a high-profile ceremony at London Victoria station this Thursday morning, the specially-liveried class 66 locomotive was first revealed to the public.

The diesel workhorse 66769 has been named “League Managers Association” and painted to feature the Prostate Cancer UK logo, “The Man of Men”. The ceremony was attended by representatives of GBRf, Prostate Cancer UK, and the League Managers Association – the representative body for those involved in football management in the top four tiers of English football. After the naming ceremony, guests boarded a specially chartered service hauled by the newly named locomotive for a trip around the equally-iconic Kent countryside.

The locomotive will now go on an extravagant four-day rail tour, as a fund-raising effort on behalf of Prostate Cancer UK. The September rail tour, “GBRf 2021”, scheduled to be hauled by the newly named and liveried class 66, will be the third such rail tour organised by the company, having raised over a quarter of a million pounds (around 280,000 euros) from its previous two marathon charity charter trains.

Representing the LMA, its chairman and former England manager LMA Chairman Howard Wilkinson, offered his thanks and congratulations to GBRf on scoring a significant result. “On behalf of the LMA and all the association’s members, I would like to thank GB Railfreight for unveiling this locomotive in honour of its partnership with both the LMA and Prostate Cancer UK”, he said. “ We are extremely proud to be partners with these two fantastic organisations.”

John Smith, the CEO of GB Railfreight, recognised the high ambition of the partnership. “Our specially painted class 66 locomotive will be raising vital awareness around the issue of prostate cancer by showcasing the iconic Man of Men logo as it travels across the country on the railway”, he said. “This has only been made possible by the strong collaboration GBRf has with its two brilliant partners, Prostate Cancer UK and the League Managers Association.”

Also this week, GBRf officially opened the company’s Peterborough HQ, situated on the East Coast Main Line, about one hour north of London. Recognising the regional economic development, the official opening was performed by UK Rail Minister, Chris Heaton-Harris. The government official has experience of the rail freight sector, as he is the member of parliament representing Daventry, including the rail freight terminal there.

The new the million pound (3.4 million euro) building at Peterborough accommodates GBRf’s train crew and office staff including its 24-hour control centre, training and operations departments, as well as the asset management team. During this first year of operation, 120 people are expected to use the facility and develop skills to qualify for a variety of roles from trainee train drivers to apprenticeships.

Heaton-Harris said the headquarters will provide future generations with the essential skills and knowledge for a successful career in rail freight. “Our rail freight sector has kept our country and economy moving through the pandemic, and we will continue to support the growth of this key industry, particularly as we look to decarbonise transport and deliver net-zero by 2050”, he said as he completed the opening ceremony.