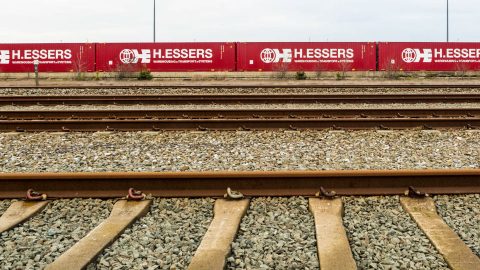 Since 7 June, a new rail connection between Genk in Belgium and Duisburg in Germany runs three roundtrips per week. It transports chemicals and pharmaceuticals, and in the future, it could become more frequent with daily connections.

The shuttle train is organised by H. Essers in collaboration with Duisport. It leaves Belgium at night and returns the following day, after transhipping cargo in the German hub. Its launching serves three purposes: the timely delivery of goods with less CO2 emissions, the expansion of H. Essers’ synchromodal services, and the use of Duisburg as a hub for cargo distribution to other countries.

Duisburg as a gateway

Genk serves as an operational centre to H. Essers, which owns the town’s rail terminal and a road cross-dock. The connection with Duisburg allows the company to use its hub function and establish links with central and eastern Europe that can extend as far as Russia and China. Most importantly, the transport company can do it by rail: “From Duisburg, thanks to its extensive rail options, we can trace deep into Poland, for example. Previously, we had to rely on trucks for this. And then, of course, there is the accessibility of the Baltic States, China, Russia”, narrates Christopher Van den Daele, business unit manager at H. Essers.

However, this is not the only benefit. Transporting cargo from Genk to Duisburg and then to other destinations is just the first step. H. Essers intends to exploit the service’s full potential on the way back to Genk. Soon, it aims to load products from countries reached via Duisburg and tranship cargo from Duisburg on the shuttle train. In this way, the company will return the shuttle train full to Genk and extend the transport options from the Belgian town to southern Europe.