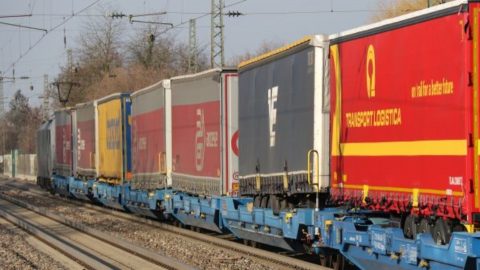 Since late April, semi-trailers transported on pocket wagons through Denmark must weigh at least 14 tons. They must be heavier than usual to ensure stability while on rail tracks. However, companies find it hard to cope with this regulation, which, in fact, shifts cargo to road transport.

The 14 tons rule is part of a temporary safety measures plan that allowed the transport of semi-trailers to resume in Denmark after a ban of four months. Together with this rule, the Danish authorities introduced five more that concern the type of hitch used by semi-trailers, the assessment procedures before a train trip, and the safety documentation, among others.

Despite the initial fears that the hitch type (that must withstand vertical forces greater than or equal to 85kN) would cause issues to companies because of its compatibility with pocket wagon locks, this is not the case. Companies struggle more to meet the 14 tons gross weight that allows semi-trailers to travel.

10 per cent of goods move to trucks

For Samskip, the weight regulation affects its business more than any other. According to Johan Grootkarzijn, director of rail Samskip, trailers weigh six and seven tons depending on their type. To reach the 14 tons limit, cargo for each trailer must weigh at least six tons. Understandably this is not always possible. As a result, many light loads travel by ferry or trucks between Sweden and the European mainland.

“This means that around 10 per cent of cargo is currently shifting from rail to road”, said Grootkarzijn, explaining how the regulation leads to a reverse modal shift. On top of that, he underlined that the specific rule is unfounded and that research conducted by Danish universities dictates that the tonnage could be lower. The sector has proposed a 10-ton limit which, so far, has not been heard.

On the other hand, in Skanerail, they look at the situation with more optimism. As Henri Leemans, the founder of Skanerail’s connection between the Netherlands and Sweden, explained, loading the needed weight on trailers is not always possible. In this sense, the regulation is a problem since it causes extra hurdles.

Simultaneously, “it’s better than not travelling at all”, he says. Skanerail suffered many losses due to the semi-trailer ban between January and April 2021. Apart from the impact on its revenues and volumes, the company also postponed the expansion of its services in Scandinavia. “We need to live with the situation and go on”, continued Leemans, who does not want to experience similar situations as Q1 2021.

Skanerail is even under these conditions able to plan the expansion of its services during October, while the regulations could also change soon and facilitate semi-trailer transport more. “Keep an eye on Denmark. In two-three weeks, we might have some changes in the rules, concluded Leemans.