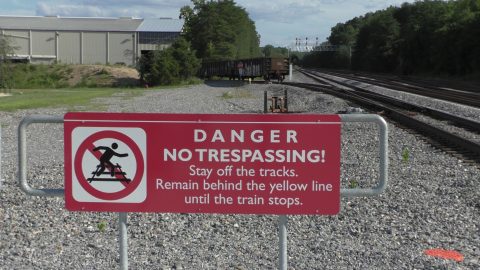 Is it time for people to take railway safety more seriously?

More than half (61 per cent) of the fatalities from railway accidents in the EU involve unauthorised persons and trespassers. Since freight trains are increasingly engaged in such safety incidents, it’s time to tackle this issue better.

At the end of July, police reports from Germany described how a girl climbed on a freight train, travelled on it for 70 kilometres and then jumped while the train was still moving. As a consequence, the girl suffered severe injuries. On the other hand, the Italian company FuoriMuro reported incidents where migrants onboarded freight trains to cross the French-Italian borders putting their health and lives at risk.

What urges people to surf on freight trains? Are there any trespassing hotspots? And what means of prevention use the authorities and railway organisations? Isabelle Fonverne, Senior Advisor of safety and interoperability at UIC, sheds light on the situation.

Train surfing is a phenomenon observed worldwide but more in some countries. “We have observed cases in the EU, Russia, India or even South Africa where people risked their lives in various ways”. Most of the time, the risk-takers are young people who cross the limit in an attempt to show off or experience an adventure. They show a particular interest in climbing on trains parked in stations or depots, which is forbidden and indicated by warning signs put in place by the railways.

Nevertheless, they are not the only ones. As mentioned before, the case of migrants is also quite frequent. Migrants try to find their way in foreign countries by walking on rail tracks. Additionally, they hide in trains when they want to cross borders, and both of these tactics can prove fatal. Moreover, homeless people can also attempt to find shelter along the tracks, with unfortunate results sometimes. Finally, the instances of intoxicated people walking or falling on rail tracks is not something unusual.

“When it comes to young people, showing off to friends and getting a raise of adrenaline is the number one motive for trespassing”, says Fonverne. They trespass tracks, go into stations and climb on trains to take photos or film themselves while in action. The social media frenzy drives them to risky situations that they do not assess sufficiently. As a result, some young people might get electrocuted, fall and get hit by a moving train, or get run over by the train they climbed on. In most cases, the result is death or severe injury.

Furthermore, when it comes to migrants or homeless people, the only measurable factor is the urge for survival that takes over. In difficult situations, people resort to strained solutions without really considering the dangers involved.

However, there is a third motive that should not be overlooked: suicide attempts. A considerable percentage of fatal rail accidents involve people who try to commit suicide in the railway premises. In all three instances of trespassing motives, railway companies have identified hotspots where incidents occur with a higher frequency. Unfortunately, it is not easy to communicate openly and expose these hotspots “because it could have copycat’s effects,” explains Fonverne.

How can rail companies enhance prevention?

When it comes to rail freight, there is not much space for more control over the tracks. As Fonverne underlines, “it is not feasible to put fences, cameras or police everywhere”. Moreover, the freight trains are not easy to fully monitor in general. They are pretty long trains on which there is only the train driver. Consequently, if someone onboards the train just before departure or during an intermediate stop, it is tough to spot them or prevent them from doing that.

Even when parked before a trip, loaded freight trains are usually watched by cameras in bigger stations. In smaller stations, this is not always the case. However, even in bigger stations, trains will be watched according to the value of their cargo, meaning that still, there will be trains that will remain unattended. Does that mean that monitoring is insufficient? Not really, because it is practically impossible to keep an eye on every single train, wagon and locomotive all the time. Even if this was possible, there would still be incidents, as people find very creative ways to hide.

So what is the solution?

So far, there was no global organisation tackling the Trespass and Suicide Prevention issue. Fonverne explains that the resolution of those safety issues relied on national initiatives until now. Precisely because of that, UIC (International Union of Railways) recently launched a new working group, the TreSP-Network.

The working group’s objective is to create an international and permanent platform to tackle railway trespass and suicide prevention issues, exchange best practices and release guidelines and organise annual or bi-annual international awareness campaigns and conferences. Additionally, they aim to update the RESTRAIL toolbox  (REduction of Suicides and Trespasses on RAILway property), a problem-solving guide for implementing measures to prevent railway suicides and trespassing accidents and mitigate the post-incident consequences.

Understandably, raising awareness is the most potent weapon in the race against railway trespass and accidents. People must understand that putting their lives in danger, especially for the sake of fun, can prove detrimental. All trains and freight trains, in particular, are heavy and fast-moving vehicles that can kill or severely injure an unauthorised person onboarding them. On top of that, their cargo (e.g. chemicals) can also impact the health of people. Finally, the act of trespassing railway tracks is strictly forbidden. Depending on the country, trespassers could be taken to court and face high fines.

Each year UIC and 45 participating countries organise the International Level Crossing Awareness Day (ILCAD: www.ilcad.org) to aware the public on level crossing safety issues. The participating railways also organise regular safety campaigns to inform the public, particularly young people, about the dangers they may encounter on and around railway tracks, on platforms, on the risk of electrocution, and the risks of train surfing.

Railway museums can be found all around the world. Except for the beauty of the exhibited trains and railway equipment, some also organise awareness exhibitions and activities for children and teenagers like la Fundación de los Ferrocarriles Españoles (Spanish Railways Foundation). So, next time someone feels so eager to see a train from a close range, it’s better to consider following awareness safety campaigns or visiting a museum instead of jeopardising their own life.