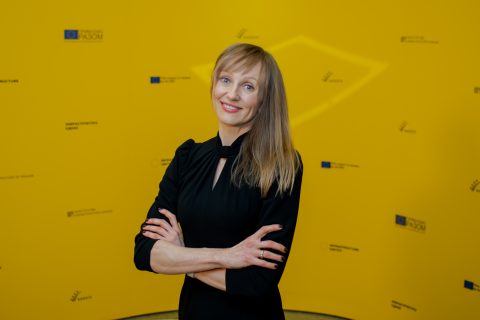 Ukraine finds itself amidst a boom of rail freight-related developments. The country is a well-known transit hub for Eurasian traffic, and its potential has been discussed before. However, its railway market has a lot to offer. That is why the government has launched a reform project to make it more accessible for private companies and compatible with the EU Member States. As Iryna Koshel explained in an interview with Railfreight.com, “rail in Ukraine is expecting significant changes”.

Iryna Koshel is among the speakers of the RailFreight Summit Poland 2021. In this interview, she provides a glimpse of what she is working on currently, how she got involved with rail infrastructure projects, and her goals for Ukrainian rail. Are you interested in her presentation and learning more about the developments in the eastern European country? Then find her in the event programme and register here.

Iryna, tell us a bit about your role.

My name is Iryna Koshel, and I am the head of the Reform Support Team at the Ministry of Infrastructure of Ukraine. Our main goal is to provide and ensure the implementation of mechanisms that would improve legal and investment platforms for infrastructure. RST is part of the URA program, supported by the EBRD’s Ukraine Stabilisation and Sustainable Growth Multi-Donor Account (MDA), an instrument developed jointly by the EBRD and the European Union.

Our technical office connects the government bodies (ministry and its subordinate agencies) and international partners. My functions as a Director of RST are related to designing a strategic vision of developing Ukrainian infrastructure jointly with government representatives (developing strategic work plans to facilitate the reform process) and coordinating work between stakeholders and representing the Team.

You are officially a lawyer. How come and you are interested in rail freight and rail infrastructure?

At the beginning of my career, I worked as a lawyer in the private sector, but after a couple of years, I moved to the infrastructure sphere, which captivated me. I worked for the Ministry of Infrastructure as a public servant from 2004 until 2016, when I grew from chief specialist to director of the Legal department. I obtained deep knowledge and experience in developing legislation in the transport sector (including railway, road, maritime, inland water and aviation sectors).

In 2016 my pursuit of development brought me to RST that was just established within the Ministry. I got a position of Senior Legal Counsel in Transport Law, where I coordinated the development of legislation in the transport sector and later moved to the position of Director. So, as time passed, my interest in infrastructure has evolved into a deep passion. Creating better infrastructure in Ukraine, including railways, is what the RST and I personally strive for.

Why focusing on Ukraine? What potential do you see there?

Ukraine is dealing with several megatrends in the planning for future infrastructure. One of Ukraine’s most vital tasks today is implementing EU Directives and Regulations into current legislation. But at the same time, we are building new infrastructure facilities, reconstructing existing ones while continuing electrification projects.

Railway transport of Ukraine is the leading branch in the country’s transport sector, covering 82 per cent of freight and about 50 per cent of passenger transportation. Rail is expecting significant changes related to structural transformation, liberalisation of markets, and integration with the private and institutional investors – a subject of the EU-Ukraine Association Agreement. Market liberalisation will improve the competitiveness of the national rail market and increase the attractiveness of rail transport.

What are the pros and cons of Ukraine as a rail freight market?

Due to its geographical location and availability of comprehensive infrastructure facilities, including thirteen ports, extensive railway network, roads, airports, Ukraine is an alternative transit hub between the EU and Central Asia, China and India. Moreover, several international transport corridors cross Ukraine, such as TEN-T, TRACECA, OSJD (Organization for Cooperation of Railways), Pan-European Transport Corridors, also positively influencing its development as a transit country. Therefore, investments in Ukrainian transport infrastructure will allow the development of modern, efficient and effective transport assets to become a leading transit bridge for other countries.

On the other hand, there are some negative consequences of the development of freight transport such as pollution, climate change, noise, congestion and accidents, which pose problems to the economy, health and well-being of Ukrainian citizens. That is why we pay attention to the ecological impact of transport according to EU Green Deal, and increasing of environmental safety of transportation is one of our priorities.

Infrastructure projects in the country are always welcomed with warmth by companies and other European countries. Why do you think it is that?

I would answer using an example. The Ukrainian Government identified a pilot railway stations concession project that could bring economic and social benefits. The project attracts private investment to finance the development and improvement of infrastructure and station facilities to improve the quality of service and create additional job opportunities. The project will be implemented during the following years and is supported by International Finance Institutions. Understandably, opening up the market to third parties, creating new jobs and providing potential for the country’s economic growth are factors that can easily draw attention.

What is the country’s goal? Becoming a key transit country or a rail freight hub itself? Can it play a more critical role in terms of imports and exports?

Our primary objective currently is to create a safe and efficient transport complex in Ukraine, which would be integrated into the world transport network, meet people’s needs in transportation services, and improve the conditions of doing business to ensure competitiveness and efficiency of the national economy. The Parliament of Ukraine has voted the law «On multimodal transportation» at the 1st reading, which provides a basis for the functioning of multimodal transportation in Ukraine, establishes basic principles of state regulation and introduces new concepts.

Freight transport is a powerful tool for economic growth and development of regions and integration between regions. As the National Transport Strategy of Ukraine – 2030 stipulates, we have to ensure, among others, operational compatibility, the establishment of infrastructure complexes, rolling stock upgrades, and synchronisation with EU Member States’ freight services. The rest will come with time.

What are your personal goals about the project you are working on? What do you want to succeed?

In general, the measure of success will be reforming Ukrainian transport infrastructure and opening the market according to the EU acquis to enable full integration to the EU transport system. Regarding the railway sector, work focuses on the new draft law «On Railway Transport of Ukraine». The Reform Support Team has put a great effort into its preparation. Currently, the draft Law On Railway is in Parliament. We expect it to be voted soon. Adoption of this law will mean great success for RST and the Ukrainian railway sector in general.

What does Poland mean for Ukraine? Does the country try to coordinate internal developments with its neighbour?

Ukraine and Poland have a long historical relationship – ethnic, cultural, economic. We even co-hosted European Championship in 2012. So, it’s natural that our countries perceive each other as strategic partners, including the transport system. We are interested in increasing the export potential of Ukraine and rail freight traffic between Poland, Ukraine and Europe. This year the new intermodal terminal Mostyska in the Lviv region has opened on the border between Poland and Ukraine. The terminal lies close to the railway border checkpoint Mostyska-II, near the international highway M11 at the border with Poland.

From April 2020, a weekly train arrives from Poland, with cargo headed to Ukrainian destinations to the west (Khmelnytskyi), central Ukraine (Kyiv, Vinnytsia) and the east (Dnipro, Kharkiv). From Mostyska, trains connect with Gdańsk, Gdynia, Central Poland, Upper Silesia, Lower Silesia, Berlin and Brandenburg Region, Hamburg, Duisburg, Rotterdam and Antwerp. Ukrainian Railways will start electrifying and modernising the Kovel-Izov-Derzhkordon route between Ukraine and Poland during the following months. This is one of the largest and most important projects that will increase the export potential of our country.