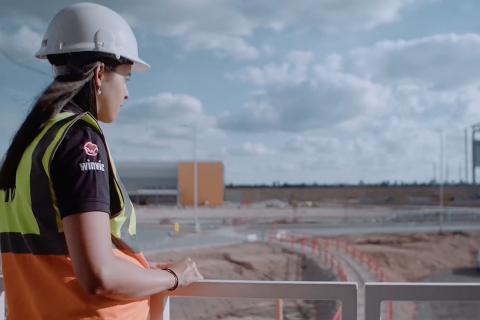 Logistics infrastructure specialists Winvic Construction have reached a turnkey point in the English Midlands. As contractors at SEGRO Logistics Park Northampton Gateway, the company has begun the programme of works for a strategic rail freight connection that will eventually enable the connection to the Northampton loop of the West Coast Mainline.

The Strategic Rail Freight Interchange (SRFI) at Northampton has taken a significant step forward. Work has begun on the rail connection to the West Coast Mainline (WCML). SEGRO Logistics Park Northampton Gateway is part of a growing network of modern-day freight interchanges, endorsed in the UK government plan for decarbonising the economy.

Winvic has begun with earthworks in preparation for the building plateaux, estate roads, and a 170-metre reinforced concrete tunnel, which will screen freight trains after departing from the terminal. Foundations will be laid for the concrete walls, and pre-cast beams will be installed before the structure is buried with earth and landscaped.

In the first couple of months of operations, Winvic anticipates moving around one million cubic metres of material to facilitate the project. The 450-acre (182 hectares) development will be home to five million square feet (456,000 square metres) of sustainable warehouse space and logistics facilities. The facility is also adjacent to the M1 motorway, connecting London, Sheffield and Leeds.

The need for facilities such as Northampton Gateway has increased over the past eighteen months. Andrew Pilsworth, Managing Director, National Logistics at SEGRO, believes the facility had more relevance than ever. “The World Economic Forum estimates that nearly a quarter of the UK’s population is expected to permanently change the way they shop following the pandemic”, he said. “It is thought that e-commerce could rise from 19.2 per cent to 53 per cent by 2028. It will only be possible for people to buy more goods online if they choose to and to have them delivered promptly if we continue to develop high-quality warehouse space in the right locations, such as SEGRO Logistics Park Northampton Gateway.”

In the UK government plan for a greener, zero-emissions economy, the importance of dedicated distribution hubs, served by rail, was emphasised. The plan, published at the end of last week, calls for a network of modern facilities and mandates growth in rail freight, backed up by last-mile delivery. “At this site, we will also have the added benefit of the rail freight terminal, which will enable these goods to be transported around the country more sustainably”, said Pilsworth.

The infrastructure improvements are being delivered in partnership with Highways England, Network Rail and local authorities and are anticipated to be complete by the end of 2023. When complete, the site will also include over 80 acres of parkland and amenity grassland, 18km of footpaths, 20km of hedgerows and the planting of 60,000 new trees.