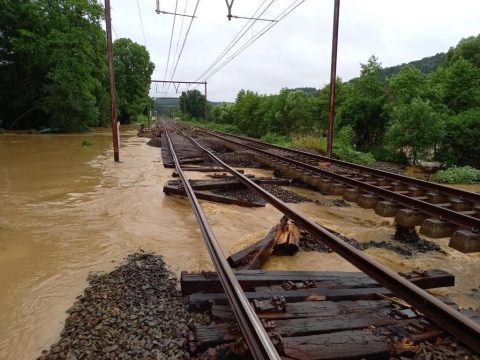 The Montzen route, one of the routes that connects the Flemish seaports in Belgium with Germany, was opened up again for freight trains on Friday afternoon, after it was closed due to flooding. Rail freight routes through the south of Belgium are still blocked by heavy rainfall.

The Belgian rail operator saw its train traffic to Germany come to a standstill from Wednesday after severe weather in the province of Limburg had damaged the track. Crossrail has about thirty trains daily commuting between Belgium and Germany.

“We have tried to shift trains to the Brabant route through the Netherlands, via Venlo. Because this connection is very busy with traffic from the Betuweroute, where work is underway, the options were limited”, continues Hamelers. Fifty trains were impacted at Crossrail due to the problems with the track.

In the Liège region, where a lot of cargo to and from China departs for Germany via the Montzen route, the problems have not yet been solved. “The damage to the track in the Liège area is much bigger”, says Hamelers, who hopes that this traffic will also start again by Monday.

According to Infrabel, the infrastructure manager, the prospects for the Walloon axis between Charleroi and Liège are positive. “If everything goes according to plan, railway lines 125 and 130 could run again on Monday, 19 July. The railway line between Liège and the Dutch border at Maastricht is closed at the border crossing. The water damage is significant there and the recovery is not in sight until 2 August. Infrabel is in close consultation with its customers and foreign infrastructure managers to seek and offer solutions.”

Combined Terminal Antwerp (Combinant), an open access rail terminal, has also been severely affected by the line closures. The company receives and dispatches cargo, among other routes, via the Luxembourg route. Serious damage has been reported on this route and Infrabel has shut down rail traffic here since Thursday.

“Tracks have subsided and trees have blown onto the rails,” said a company planner, who said incoming and outgoing traffic has come to a standstill since Thursday. Indeed, the important North Sea Mediterranean freight corridor continues to be severely affected by the storm, said Infrabel on Friday afternoon. “There is still no train traffic on both the main axis and the alternative detour route.