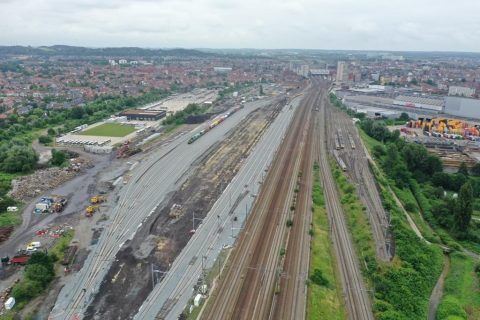 Infrabel, Belgium’s infrastructure manager, is implementing a renewal project on the tracks of the Bundle M station at Leuven. The works include the reconstruction of rail tracks that will reach lengths up to 750 metres. As a result, the station will become suitable for using long freight trains compatible with the TEN-T plans.

Bundle M and Leuven are positioned in Flanders, very close to Brussels. The Belgian government will invest 7 million euros in the track renewal project that has high possibilities of transforming the Belgian city into a new logistics hub in the region. The investment is part of the Belgian government’s ‘Boost’ plan, aiming to increase the country’s rail freight share to 16 per cent by 2030.

Construction works started in May, while the finishing touches for the project will take place this autumn. Infrabel aims to deliver Bundle M fully operational for freight trains by the spring of 2022.

The project is important in terms of opening the way for more freight trains in Flanders and, respectively, Belgium. Transforming a railway station to become freight-friendly indicates the Belgian government’s commitment to increase the country’s rail freight share.

However, the most critical aspect of the project is constructing tracks suitable to accommodate trains up to 740 metres long. Not only will the tracks be compatible with TEN-T regulations, but they are a decisive step towards facilitating the traffic of longer trains in the Benelux region. The discussion around 740 metre-long trains in the Netherlands, Germany and the Rhine-Alpine corridor is very relevant since it can result in higher capacity for rail freight.

Since Leuven is a junction between three European Rail Freight Corridors (RFCs), including the Rhine-Alpine, its new profile could be a stepping stone towards using longer trains in the broader region.

New hub in the making?

Leuven is located on the North Sea-Mediterranean RFC accommodating traffic from Zeebrugge/Ghent and Zeehaven/Muizen/Antwerp towards Athus Meuse in the border with Luxemburg and France. Due to its position, it also has easy access to the Rhine-Alpine and North Sea-Baltic RFCs.

Moreover, its central location is in close proximity with multiple businesses, ports and hubs, generating the potential for it to transform into a rail freight and logistics distribution centre for the Flanders region. Attracting more traffic means that a new route is in the making and that other more heavily used routes will possibly decompress and operate more smoothly.