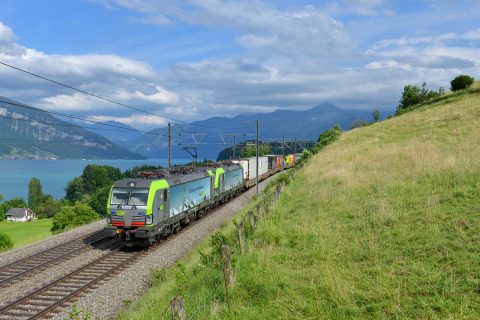 Per the 1st of June, a new intermodal service will connect the German hub of Duisburg with Poznan in Poland. Three roundtrips per week are scheduled between the inland port and Poznan. The service is a cooperation between Cargobeamer and the Duisport Group.

Starting in June, customers can transport semi-trailers environmentally-friendly by rail between Duisburg and Poznan, said the Leipzig-based Cargobeamer. It signed a deal with Duisport Group in 2020, focussing on a strategic partnership. Both parties are looking forward to start transports on this new intermodal route by June.

Besides semi-trailers, the service allows for the transport of P400-trailers, containers, bulk and frigo trailers as well as dangerous goods. Cargobeamer is also launching a new connection in France next month, connecting Calais and Perpignan.

“The new lanes between Duisburg and Poznan as well as Calais and Perpignan will serve as an important step towards our vision of a European network of intermodal Cargobeamer trains, a goal we are constantly working on to achieve. Together with our partner Duisport we are very pleased to address the eastern European markets for the first time. We are strongly considering more actions towards this region in the near future”, illustrates Nicolas Albrecht, Chief Business Development Officer and part of the three-member Cargobeamer executive board.

Thanks to its technology of rail cars, handling terminals and logistics software, Cargobeamer is able to facilitate rail transport for nearly all standard semi-trailers of all types, without additional conversions and reinforcements for the trailer and even without a driver and tractor unit.

A route between Kaldenkirchen at the German/Dutch border and Domodossola in northern Italy has been serviced by daily trains since 2015 and is fully utilised – more than 70,000 trailer journeys through Germany and the Alps have been transferred to the environmentally-friendly railroad track to date. In the medium-term Cargobeamer wants to realise a European route-network of transhipment facilities at important transport hubs, enabling rail transport for hundreds of thousands of semi-trailers per year.