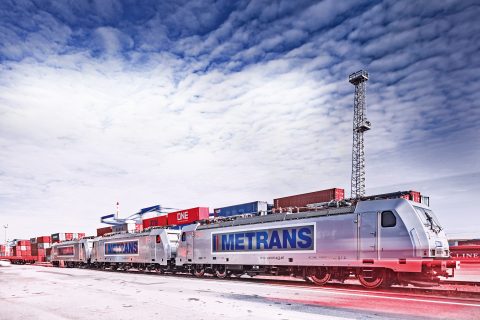 In 2020, METRANS has increased the number of container trains travelling between Europe and China by 114 percent. This is despite the pandemic. According to the HHLA subsidiary, the coronavirus pandemic and resulting capacity bottlenecks in shipping have given an added boost to rail transport links.

The volume and frequency of rail freight traffic between Asia and Europe has increased significantly in recent years. According to the estimates of management consultancy Roland Berger, around 878,000 TEU’s were transported along the various rail corridors of the New Silk Road in 2020. The international railway organisation UIC assumes this number could double by 2025.

Growth continued in the first quarter of this year. According to the National Development and Reform Commission of China, Q1 saw the transportation of 322,000 TEU’s of goods between Europe and China, a year-on-year increase of 75 per cent. The majority of this is still westbound traffic. In Q1, 1,858 trains departed westbound with 182,000 TEUs of goods, while 1,540 trains returned, with 140,000 TEUs of goods.

As one of the main operators along the New Silk Road, METRANS has been able to reap the benefits of this positive trend. The transport volumes of METRANS on the New Silk Road are approximately 30,000 TEU’s. The intermodal company operated 913 trains in 2020, in both directions. In comparison, it operated 426 trains a year earlier, indicating an increase of 114 per cent. Also for METRANS, westbound traffic accounted for the largest growth: 131 per cent.

Per month, METRANS operates 60 to 80 trains between China and Europe. Together with partners, it assembles the block trains in Chinese hubs such as Zhengzhou, Xi’an and Jinhua. The trains are then taken over by traction operators at the various hubs of the Eurasian rail corridor. These hubs are the Polish border terminal Malaszewicze (near the Belarusian city of Brest) and the Slovakian terminal in Dobra (near the Ukrainian border).

The containers are then distributed throughout the entire METRANS network. The key hubs for the rail cargo flows between Europe and China by METRANS are its hub terminals in Budapest, Prague, Ceska Trebova, Poznań and Dunajska Streda.