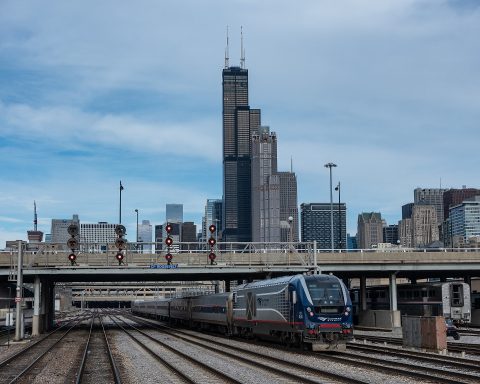 In the US, freight is held accountable for passenger delays

Whereas in Europe the debate continues on whether freight trains should be prioritised over passenger services, in the US the argument is the other way around. The US Senate last week introduced legislation that could bring infrastructure managers to court, for not prioritising passenger trains.

On 29 April, the bicameral Rail Passenger Fairness Act was presented in the US. The bill provides Amtrak with the ability to take the freight railroads (infrastructure managers) to court in order to enforce current law, which requires freight railroads to provide preference to passenger rail operating on their rail lines.

Other than in Europe, freight traffic dominates on the US railways. Passenger traffic is mostly within cities, while intercity passenger service, once a large and vital part of the nation’s passenger transportation network, plays a limited role today.

This is something the new Government would like to see changed. The Biden Administration presented a 2 trillion US Dollar infrastructure plan last week, which would set aside a substantial amount of money for rail development, with an emphasis on passenger service and mass transit.

The new bill, which was proposed by U.S. Senate Majority Whip Dick Durbin, U.S. Representative Donald M. Payne Jr. and U.S. Senator Richard Blumenthal, fits within that strategy. Passenger traffic should be improved, and they hold freight accountable for the poor accuracy rate of passenger traffic.

“While the Amtrak Improvement Act of 1973 mandated that intercity and commuter passenger rail be given preference over freight railroads in using a rail line, freight railroads continue to ignore their obligation to provide Amtrak preference. As a result, freight train delays have caused roughly 60 per cent of Amtrak’s delays in recent years”, reads the press release.

Amtrak is particularly thankful for the introduction of the bill. “Host railroads are required by law to provide Amtrak trains preference over freight trains. Unfortunately, some host railroads frequently fail to meet this requirement and ‘freight train interference’ is the largest source of delay to Amtrak trains on host railroads, violating the law and inconveniencing passengers”, said Amtrak President & CEO Bill Flynn.

Thus, although the focus is mainly on passenger traffic, freight will not completely miss out on the investments. What’s more, there are projects aimed at alleviating congestion at ports and other choke points for freight, which should benefit intermodal traffic.